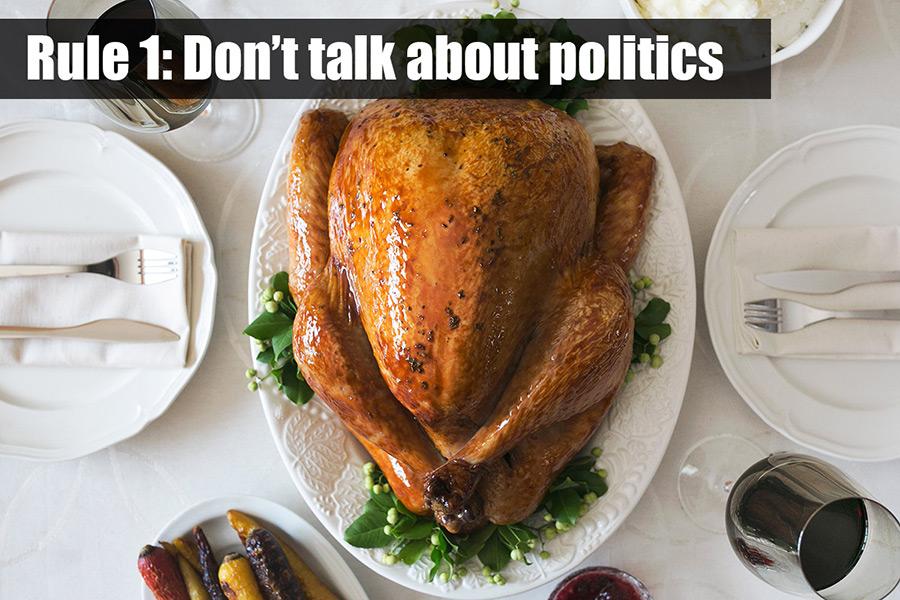 At least one family's Thanksgiving dinner was disrupted by a fight over politics.

A 39-year-old Murfreesboro man got into an argument with his brother after Thanksgiving dinner that turned physical while discussing politics.

The 39-year-old man told Murfreesboro Police his mother and brother assaulted him and prevented him from leaving after the argument. The victim said “he was attempting to leave when his mother grabbed him, shook him and held him down at which point his brother grabbed his cell phone when he stated he was going to call police,” according to the incident report.

The man's brother said their mother was attempting to keep the victim from driving under the influence after an argument about politics.

“When (the mother) realized she could not physically stop him from leaving, she fell to the ground in front of the door and pleaded with him not to leave,” the report said.

The brother stepped in at that point, grabbed the victim and said: “Look at what you're doing to mom!”

By then, the victim had called the police to report an assault.

“(The brother) stated … he was attempting to show (the victim) how distraught his mother was,” the report said.

Because the 39-year-old man was drunk and there was no physical evidence of an assault no one was arrested and all refused transport to a safe place. But all parties were told about the Domestic Violence Program.

Xenos is accused of robbing three banks in Nashville and one in Smyrna by passing notes to tellers.

MNPD and the FBI are investigating the incidents.

MPD used the holiday weekend to scoop up a few fugitives.

On Wednesday, Nov. 22, Officer J. Fox arrested Michael Thomas Spencer, who was wanted in Pennsylvania for various crimes against children.

Spencer, 21, of Murfreesboro was apprehended from a residence off South Rutherford Boulevard.

A warrants checks found he was wanted in Pennsylvania for violation of parole. His original conviction was for rape of a child, sexual intercourse with a child and aggravated assault of a child, among other distasteful crimes.

One of Rutherford County's Most Wanted was picked up Wednesday, Nov. 22 by MPD.

Officer Billy Troutman was called by a witness who said a woman matching the description of Carmen M. Manning was at the Walmart on South Rutherford Boulevard, the officer reported.

Troutman found Manning, 36, of Murfreesboro, who was listed on the Rutherford County Sheriff's Office Most Wanted list. She had seven active warrants for violation of probation, failure to appear and felony theft.

Manning was arrested and booked into the county jail where she remains.

Tags: Bizarre in the Boro