Naked man high on drugs gets philosophical and arrested 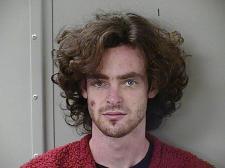 It took an off-duty Murfreesboro cop with a taser to slow down on MTSU student tripping on acid, according to police reports from MPD.

MPD Officer Eric Nelson reported he was working off-duty extra patrol around 1 a.m. Saturday, Nov. 4 at The Southern, 1751 Lascassas Pike, when he said he was approached by a 20-year-old naked man.

Nelson reportedly asked Samuel W. Haas, who was being filmed by two other men, if he was OK.

“We are all molecules that are going to fly away,” Haas replied.

Nelson then asked, just what drugs exactly, Haas had taken.

Haas replied “nothing” and ran from the officer, Nelson reported.

Nelson said he followed in his patrol car. When he caught up with Haas, he asked if he could help the young man.

“Mr. Haas stated to me that there was nothing I could do for him, but he would give me 'everything he's got,'” Nelson said.

Nelson interpreted the response as a threat and attempted to arrest the young man.

“Mr. Haas looked at me and replied 'no' and took off running again,” Nelson said.

The officer hopped out of his car, gave chase and tackled Haas to the ground. Haas seemingly bounced off the parking lot and ran off again.

“I chased Mr. Haas approximately 100 feet before he stopped and turned around facing me,” Nelson said.

A defiant and “aggressive” Haas balled his fists and began walking toward the officer, Nelson reported.

Nelson brandished his taser and shot Haas in the chest with it.

“After he was hit with the taser, Mr. Haas hunched over but did not fall to the ground,” Nelson said. “Instead, he stood straight up, yelled something unintelligible and began coming toward me very aggressively.”

So Nelson tased him again.

“After he hit the ground, Mr. Haas looked at me and stated 'not enough' and then got back on his feet,” Nelson said.

So Nelson tased him again.

Until Haas fell down and stayed down. Nelson then placed Haas under arrest.

Nelson said backup officers arrived, along with an ambulance that took Haas to the hospital.

Haas admitted to having taken LSD, Nelson said, adding a drug test showed cocaine and marijuana also in his system.

Haas was charged with public intoxication, resisting arrest and assault. He is currently residing in the Rutherford County Adult Detention Center on $1,500 bond and is set to appear Jan. 25 in General Sessions court.

Be careful who you tailgate

In an unrelated incident, another off-duty police officer reported an incident of road rage around 1 p.m. Saturday on Northwest Broad Street, according to an incident report filed with MPD.

MPD Officer Micheal Joyce was on his way to work in his personal vehicle when a red Dodge Ram was “closely following him and slamming on his brakes,” Sgt. B. Anderson wrote in an incident report.

Joyce told Anderson he was traveling eastbound on Broad Street near Sloan's Cycles when the driver of the truck cut him off. Joyce said he changed lanes and so did the truck, cutting him off again and slowing to around 20 MPH. Joyce said he tried to pass the truck several times but the truck “continued to change lanes in front of him,” Anderson reported.

Joyce then called dispatch to report the incident when the truck pulled into the parking lot of a convenience store.

“As both vehicles pulled into the (parking lot), Mr. Joyce advised the male driver of the Dodge truck exited his vehicle and approached Mr. Joyce's vehicle in an aggressive manner,” Anderson reported.

Joyce got out of his car and told the other driver he was a police officer and “to calm down,” according to the report.

The other man asked to see a badge. Joyce compiled, as best as he could, and showed the man an MPD uniform shirt.

The man backed down and went back to his truck where a female passenger began to argue with him as well.

After officers arrived, Anderson said the driver of the truck said Joyce was the first to cut him off and he pulled into the parking lot to “get away from Mr. Joyce but he followed.”

No charges were filed because a primary aggressor could not be determined, Anderson said.