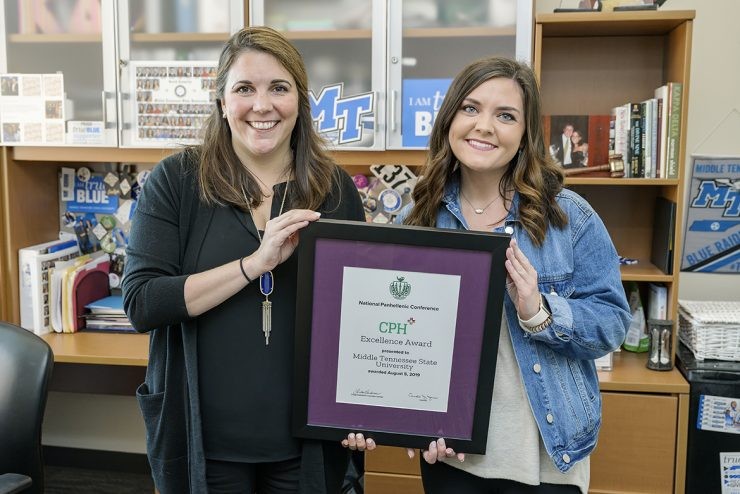 MTSU's Panhellenic Council has been recognized by its national governing body as one of the most outstanding groups of its kind in the country.

"Out of 660 Panhellenics nationwide, we were one of 26 to get the top award, which, of course, I have to be proud of," said Leslie Merritt, director of the Office of Fraternity and Sorority Life. "I am very, very proud of our women."

To be chosen for the honor, MTSU's Panhellenic had to demonstrate excellence in academics, judicial procedures, community impact and relations, programming, structure, recruitment and communication with its NPC area adviser.

Sara Sparks, MTSU's College Panhellenic Council president, said the local executive board members filled out applications over the summer and learned in early August that they'd won the award. They received it in early October. 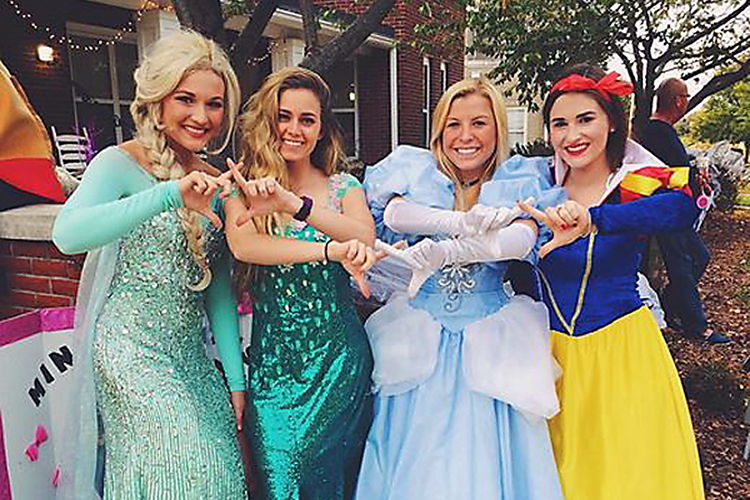 Costumed sorority sisters from MTSU's chapter of Chi Omega pose at the 2016 Trick or Treat on Greek Row. The 2019 event is slated for Wednesday, Oct. 30, and is free and open to the public. (File photo courtesy of MTSU College Panhellenic Council)

Sparks, a senior media management major from Nashville, Tennessee, said that along with events such as the Panhellenic Easter Egg Hunt and the upcoming Trick-or-Treat on Greek Row event, members of these organizations perform other services that enhance the university environment.

Merritt emphasized that the award isn't indicative solely of the work of the executive council.

"It's really the culmination of all the women in Panhellenic sororities at MTSU who make it so that we can be recognized as a council of excellence," Merritt said.

"Everyone has their individual organizations, but, as Panhellenic, we work together for the common good," Sparks said.

For more information about MTSU's Panhellenic Council and its sorority organizations, go to www.mtsupanhellenic.com. To learn more about fraternity and sorority life at MTSU, contact Merritt at 615-898-5812 or leslie.merritt@mtsu.edu.

Photo: Sara Sparks, right, MTSU College Panhellenic Council president, and Leslie Merritt, director of the Office of Fraternity and Sorority Life, pose with the College Panhellenic Excellence Award from the National Panhellenic Conference. MTSU is one of only 26 institutions in the country to receive the honor from the sorority advocacy organization. (MTSU photo by Andy Heidt) 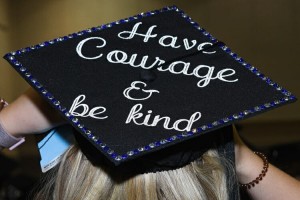