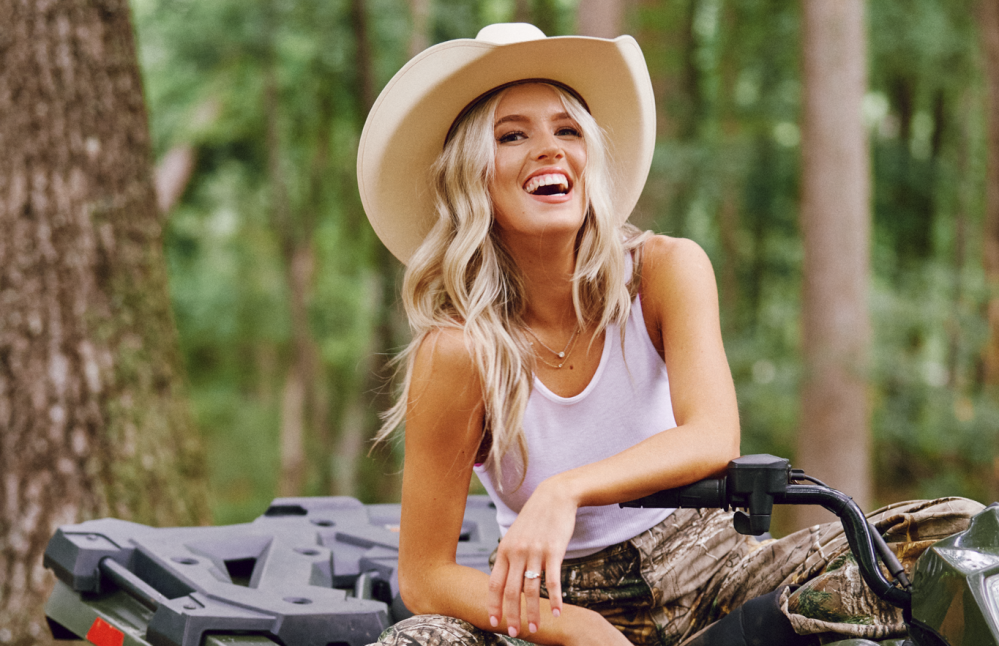 NASHVILLE, Tennessee  - Those who follow my column know I find a lot of my new artists from the Song Suffragettes or Sirius XM’s The Highway. On the Highway, they feature new artists who are often named as their “Highway Finds.” And while I’m not always crazy about every new musician they feature, when I heard Mackenzie Carpenter’s “Can’t Nobody” a few months back, it was love at first listen.

I was fortunate to interview this rising star who is both a Song Suffragette and a Highway Find. Mackenzie Carpenter hails from a little town outside of Athens, Georgia, called, Hull. She is a singer/songwriter whose soulful Country tone was honed by singing in her local church as a kid. Her dad was a preacher and she and her brothers have been singing and playing music at church for as long as she can remember. Her older brothers Micah and Maclean are both talented musicians who live and work in Nashville.

Mackenzie recounts, “My dad worked in Nashville 25 years ago. Once we all got pretty serious about music he told us, ‘You have to write songs. You don’t just move to Nashville and record covers.’”

Once Mackenzie started writing songs, Micah taught her to play guitar. As a preacher’s kid, she started off writing worship songs. And while she wrote songs and sang and played regularly at work, she had no idea how to get songs professionally recorded.

“I had no idea what that even meant. I never knew that I needed to get to Nashville to get stuff recorded. My first recording session was ‘Can’t Nobody,’” she explained.

Mackenzie did eventually get to Nashville where she attended Belmont and studied Songwriting and Music Business. She graduated during the pandemic when everything, including songwriting, was being done online. She moved back home as they waited for the world to come back.

This was a time in the music industry when practically no one was getting signed as everyone was trying to figure out what was going on. She wanted to get back to Nashville, but she knew this time she would have to have a job and pay her own way.

That is when Mackenzie got a call from singer/songwriter Lily Rose. She and Kyle Clark had written a song with her called “Villain.”

Lilly informed them, “Y’all, I am on TikTok. This song blew up. I think I am going to release it.”

At that point, Mackenzie had not even heard about TikTok. But the funny thing was, this was the only song the three of them had written together. Lily didn’t even sing the demo, so they were unaware she even liked the song. But as they soon found out. The song “Villain” resonated with millions.

Mackenzie reflects, “’Villain’ will always be a really special part of my story because it gave me the confidence to get back in it. I can do this.”

The song landed at number 1 on the iTunes Country chart and was certified gold in December of 2021.

Nashville is famous for its group writing sessions, so I often wonder how they figure out who gets the song once it is completed.

Mackenzie expounded, “Every situation is different. I know it sounds cliché, but I think that the song ends up where it’s supposed to. Sometimes one songwriter naturally gravitates toward a song, but it can get awkward.”

We talked about songs, especially some country songs that require context to even get them. With lyrics like Can't nobody write a song like Dolly/ Can't no whiskey get me tipsy like Jack/ Can't nobody raise hell like Dale/ Comin' down that last lap if you don’t have the meaning of the context, you don’t get the song.

She agrees, “If you didn’t grow up around that, you are like ‘What is she talking about?’”

And with Mackenzie’s latest release, “Huntin’ Season,” if you didn’t grow up around anyone who hunts, you may not get that song either.

With hi-hats crashing, splashing B-3 chords, and a thrumming electric guitar, Mackenzie Carpenter gleefully announces the official arrival of “Huntin’ Season.” The 22-year-old embraces her man’s getting gone before dawn with a backbeat made for finding her freedom.

She states, “I wrote this song to show off the playful side of hunting season. When your guy is outta the house, outta your hair, and totally focused on the prize. You could wait around for him to come home, constantly checking your phone, or you could lean into the fun part. Drink wine, call the girls, go shopping, even send the kids with him, if you have them. He’s gonna go, either way, so we might as well learn how to take advantage of the free time.”

The song was written about her uncle who has “pretty much every animal mounted to the wall.”

“If Uncle Jay and Aunt Sonya hadn’t had this time apart during hunting season, I don’t know if they would have made it this far,” she mused.

Mackenzie wrote the song with Nicolle Gaylon whose husband is also a big hunter.

After Lily Rose had so much success on TikTok, Mackenzie gave it a shot by posting clips and writers' rounds. Her clip of “Can’t Nobody” got Big Machine Label Group’s Scott Borchetta’s attention.

When he texted her, she thought she was being pranked. But that was how she came to sign with Big Machine.

In May of this year about the same time as signing her music deal, Mackenzie Carpenter got named Sirius XM The Highway’s newest Highway Find. They were super supportive of “Can’t Nobody” and now “Huntin’ Season is playing as well.

“I’m really grateful for that relationship with Macie, Nick, Storme, and Buzz. Once you’re in that family, it literally is a family,” she relates.

Her team at Big Machine/Vallory Music plan on rolling out five songs to become her first body of work/EP to be released early next year. They want to keep Mackenzie’s music out there for people to discover this up-and-coming artist. Each song that she releases will be paired with a visualizer that was filmed in her hometown.

What makes Mackenzie special as country music singer/songwriter is that her music is honest and true to the heart. She takes you to fun places and doesn’t take herself too seriously. I can’t wait to see what’s next for this young and rising country singer.