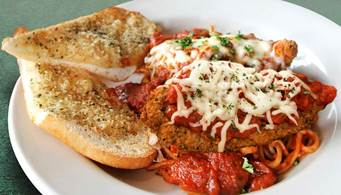 One of their Flashback menu choices, as reported by MurfreesboroVoice last month,  is a tasty dish known far and wide... THE Chicken Parmesan! This dish is plated with tender, fried chicken fillets topped with marinara sauce and melted provel cheese, served over a hearty linguine and paired with crispy garlic bread.

Provel, the cheese of choice for Metro Diner's Chicken Parm, is a white cheese that is particularly popular in St. Louis cuisine. It is also a cheese that most southerners have come to love. The cheese is a combination of cheddar, Swiss, and provolone cheeses. In case you're not familiar with how Provel cooks, it has a low melting point, which makes it a delectable delight. On Chicken Parmesan, the provel cheese proves to add just the right amount of gooeyness that has almost a buttery texture. It is the same cheese that is used as a traditional topping for St. Louis-style pizza - - in case you were curious.

Metro Diner is also adding a handheld variation of the beloved chicken dish – the Chicken Parmesan Sandwich, stacked with tender fried chicken, marinara sauce and of course, melted provel cheese on a toasted hoagie roll with the customers choice of a side – both available for dine-in, pick-up and carryout through September 25th. To view the anniversary menu, please visit https://metrodiner.com/anniversary/. (Photo above this story submitted by Metro Diner).