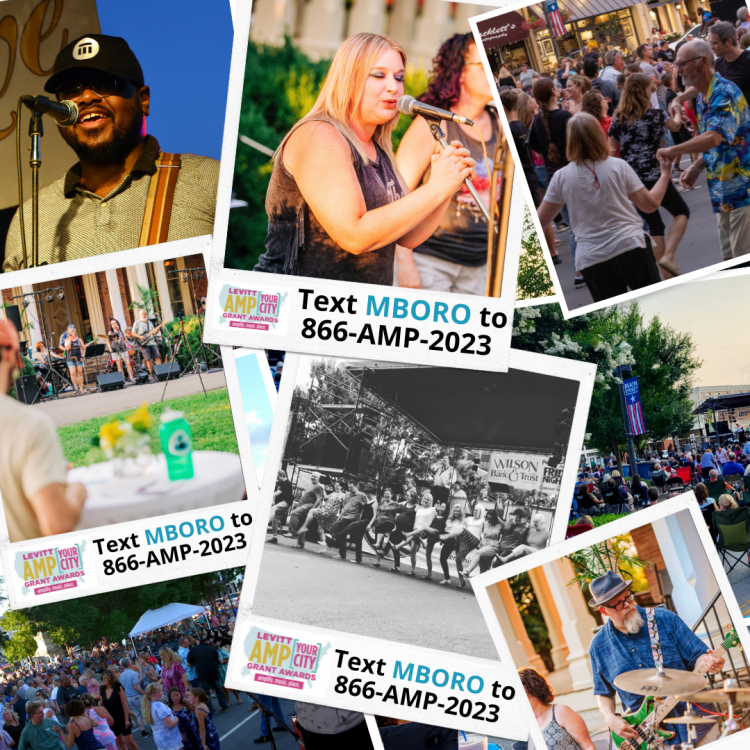 (DOWNTOWN MURFREESBORO) Main Street Murfreesboro is now in the running to bring a free outdoor music series to downtown Murfreesboro starting in 2023.

Supported by the Mortimer & Mimi Levitt Foundation, a social impact funder at the intersection of music and public spaces, Main Street Murfreesboro hopes to qualify as one of the Top 20 finalists in the public voting phase of the Levitt AMP MURFREESBORO Grant Awards. The public is urged to support MAIN STREET MURFREESBORO’S proposal by participating in the public voting process, via online or text, taking place from September 12–21, 2022, at levitt.org/vote.

The Levitt AMP MURFREESBORO Grant Awards are an exciting, multi-year matching grant opportunity created by the Levitt Foundation to serve small to mid-sized towns and cities with populations up to 250,000. Nonprofits will receive a total matching grant of $90,000 over three years (2023, 2024, and 2025 at $30,000/year) to produce their own Levitt AMP Music Series—an outdoor, free concert series featuring a diverse lineup of professional musicians that reimagines an underused public space to create an inclusive destination for people of all ages and backgrounds.

MAIN STREET MURFREESBORO submitted the proposal for MURFREESBORO to present the free music series in the historic downtown of Murfreesboro. An individual may vote for up to five proposals but may vote for the same proposal only once. There are two easy ways for the public to cast their vote: online at levitt.org/vote or via text to 866-AMP-2023 (866-267-2023) with the keyword MBORO.

Public voting opens September 12, at 12:00 p.m. and ends September 21, at 7:00 p.m. The Top 20 finalists will be selected through the online and text-to-vote public voting phase. The Levitt Foundation will then review the top proposals and will select up to 10 Levitt AMP grant recipients, which will be announced on November 15, 2022.

“This grant funding would be an amazing way for Main Street Murfreesboro to partner with several nonprofits that already put on community events downtown and help them financially to provide live music,” says Sarah Callender, Main Street’s Executive Director.  “Not only would this expand our free Friday Night Live series but also bring more diversity to our live music events through partnerships with Bradley Academy Museum’s Juneteenth festival, the Rutherford Arts Alliance’s desire to bring symphony music downtown, The Center for the Arts with Shakespeare in the Park, and expand the Cultural Festival held at MTSU.”

MAIN STREET MURFREESBORO asks supporters to spread the word to family, friends, co-workers, and neighbors and rally the community to vote for MAIN STREET’S proposal to bring a free concert series to the historic downtown Murfreesboro beginning in 2023.