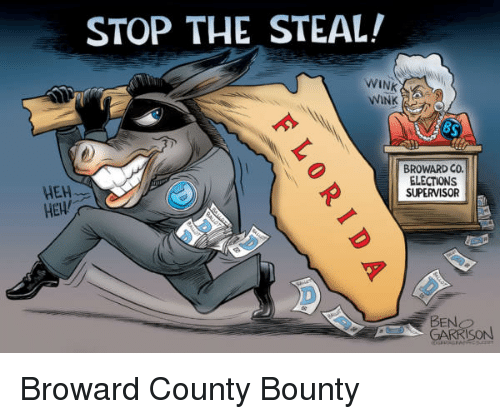 This just in: Broward County, Fla., has finished counting votes and George W. Bush has beaten Al Gore for President. Just kidding, but not by much.

Please forgive me for my topic being a little dated, but a recent opinion piece on MSNBC prompted my commentary on the never-ending rash to “find votes,” err, count every vote, that’s right.

MSNBC Commentator Donny Deutsch, probably the worst of the Trump Derangement syndrome-afflicted journalists, predicted that if Donald Trump loses the 2020 election, he will refuse to recognize the result and “call out the military” to stage a coup in an attempt to hold on to the office.

Fellow Trump basher Bill Maher agrees. Maher warned that President Trump is increasingly inching toward making himself 'president for life' and that if Democrats prevail in the 2020 U.S. presidential election he does not believe the Republican commander-in-chief will leave.

"Trump is going to go when he wants to go, and that includes losing the 2020 election," Maher said on Friday's broadcast of HBO's Real Time.

Democrats and media giants tried to trap Donald Trump in 2016 when he spoke out against electoral corruption like Hillary’s predetermined primary victory over Bernie Sanders.

The New York Times called it “a remarkable statement that seemed to cast doubt on American democracy.” Hillary Clinton said it was denigrating and “talking down our democracy.” So Donald Trump is a would-be dictator who will refuse to accept the will of the voters.

I ask you though, which party time and time again refuses to accept electoral defeat. It is the Democrats, beginning with Al Gore in 2000, followed by Hillary Clinton in 2016. Any defeat is labeled a fraud, conspiracy, and thus the elected Republican is illegitimate. Hillary still thinks Russian meddling on Facebook cost her the victory. That or white women who only do what their husband tells them to do. She couldn’t possibly be responsible.

This year, the elections that were contested were the Georgia Governor’s race and Florida’s Governor and Senate races.

The sorest of the losers is Georgia’s Stacey Abrams, followed closely by Bill Nelson in Florida. Abrams not only initially refused to concede but even today refuses to admit Brian Kemp is Georgia’s “legitimate” governor. Her loss must be the result of racism or some other nefarious plot.

Hillary Clinton said that if Abrams had a fair election, “she already would have won.” Democrat Senator Sherrod Brown baselessly claimed that “if Stacey Abrams doesn't win in Georgia, they stole it, it's clear.” But even the Washington Post admitted that Abrams and her allies were “alleging illegal activity that hasn’t been proven - and seems unlikely to be.” Abrams ended up losing by nearly 55,000 votes.

In Florida, Andrew Gillum and Bill Nelson also showed Americans how to be graceless in defeat.  After a machine recount that showed Gillum had lost to Governor-elect Ron DeSantis by 33,000 votes, he took two days to concede. His delay prompted publications like the Wall Street Journal to deem him “The Ungracious Mr. Gillum” in an editorial and call on him to concede. Bill Nelson also tried to litigate his way to a victory.

I suspect Broward and Palm Beach counties in Florida are being used as “cash cows” for the Democrats to milk votes when they’re losing or indeed have lost, by the slimmest of margins. Oh, the Dems use innocuous enough phrases like “count every vote” to justify attempts to manipulate the tallies in Broward and Palm Beach.

Forget Russian meddling. What did they do, put up fake Facebook stories? Brenda Snipes’ laughably crude tactics are the real election-related crime.

The resignation of embattled Broward County election supervisor Brenda Snipes notwithstanding, I fear this post-election chaos is a harbinger of this to come in 2020.

You history buffs or old timers may remark this reminds you of the 1960 Kennedy-Nixon election. According to many, Kennedy’s election was the result of corruption and ballot box stuffing, yet Richard Nixon refused to contest Kennedy’s victory, bad for the country Nixon stated. What does it say about you when you have less class than the disgraced Nixon?