September Unemployment Rate for Tennessee is at 3.4% 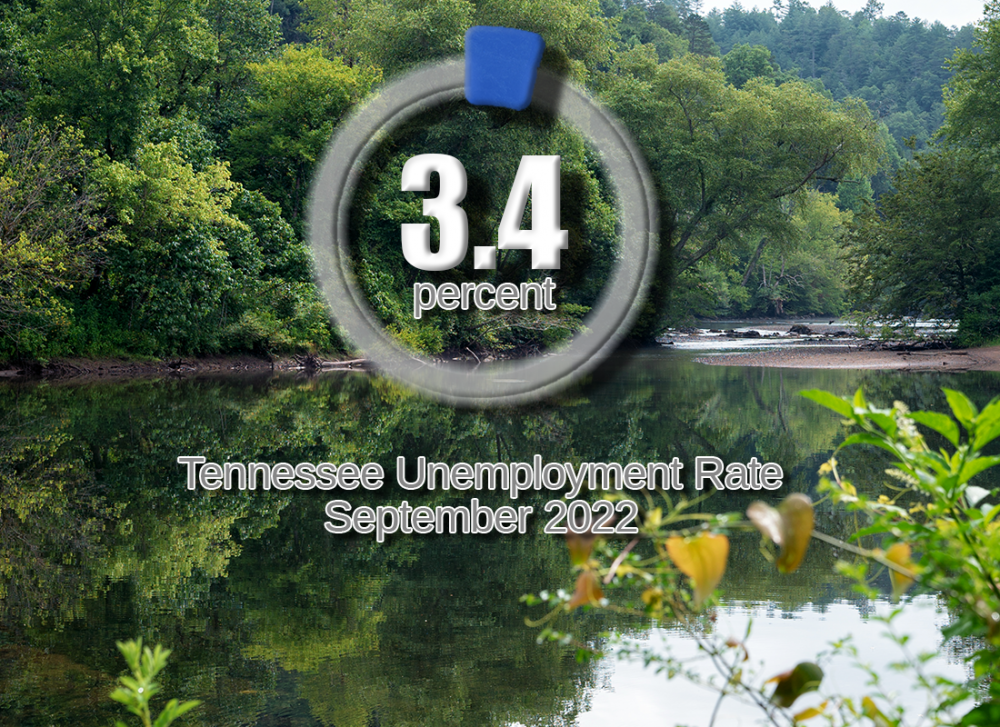 RUTHERFORD COUNTY, TN - Unemployment across the state of Tennessee remained unchanged between August and September, according to data released Thursday by the Department of Labor and Workforce Development (TDLWD). The state’s seasonally adjusted unemployment rate for September came in at 3.4% and is just 0.2 of a percentage point away from Tennessee’s all-time low of 3.2%.


One year ago, unemployment across the state stood at 3.8%, which is 0.4 of a percentage point higher than the current rate.

While county-by-county numbers for September will not be released until the end of this month, all data at this point suggests that Rutherford County figures should be similar to the 2.7% unemployment rate that was recorded in August.

Tennessee employers created 13,700 new nonfarm jobs between August and September. The trade, transportation, and utilities sector had the largest number of new jobs, followed by the leisure and hospitality sector, and then the education and health services sector.

In a year-to-year comparison, the number of nonfarm jobs across the state increased by 140,200. The leisure and hospitality sector created the most jobs while the trade, transportation, and utilities sector, and the education and health services sector came next on the list.

Nationally, seasonally adjusted unemployment dropped in September. It was down 0.2 of a percentage point, coming in at 3.5% for the month.  One year ago, the United States unemployment rate was 4.7%.

The TDLWD has a complete analysis of Tennessee’s September 2022 unemployment data available here.

Oct 23, 2022 at 12:57 pm by Elisakeily
Hello everyone, my name is Elisa Keily I am so overwhelmed with joy all thanks to Dr Raypower spell. My husband left me for another woman a few years back and I was very devastated cause I never did anything wrong to him, I was left with my two kids and a job that pays little. I was almost giving up until I saw a testimony online about Dr Raypower and I decided to contact him.I explained my problem to him and he assured me I'll see a positive result after 24hurs, surprisingly my husband came back the day after the spell begging me to forgive him and promised to never leave. My husband has been back for 6 months now and we've never had any issues, am glad I didn't doubt Dr Raypower cause he sure can solve any problems with fast relief you can also contact him for help now Email: Urgentspellcast@gmail.com  Website: https://urgentspellcast.wordpress.com WhatsApp: +2348123345491
Report
Nov 11, 2022 at 12:38 am by JadaSteng12
i just want to say a big thanks to Dr Dominion for what he has done for me, i contacted him at the point of my needs and he came through for me, he said he was gonna help me and he did, i played lottery for 20 years and couldn't win a dime, at a point i was disappointed and almost gave up, but then another thought came to my mind why don't i try a lotto spell since i have already heard about people doing it, and then i decided that i will give it a try, but there was a lot of spell casters online this got me confused that i didn't know which to pick, i decided to follow my instinct and i picked Dr Dominion i sent him an email and waited for couple of hours no reply, at this point i was already anxious and eager to get a reply from him and then i sent him a test on his WhatsApp and immediately he responded i told him what i wanted and he gave me assurance that i must win after his spell, i did what was asked of me, behold i hit the jackpot. i am so so happy to share this here because i have never seen a miracle like this before, thank you so much Dr Dominion you are a life saver. you can talk to him if you need his assistance too, that is why he said i should testify about his good work so people in need can reach out to him. his Email: dominionlottospelltemple@gmail.com website: https://dominionlottospell.wixsite.com/dr-dominion WhatsApp: +16574277820 Call: +12059642462
Report
Nov 19, 2022 at 05:53 pm by Oliviahannah
Hi everyone I'm Olivia Hannah and am here to share the wonderful work Dr Raypower did for me. After 5 years in marriage with my husband with 2 kids, my husband started acting weird and going out with other ladies and showed me cold love, on several occasions he threatens to divorce me if I dare question him about his affair with other ladies, I was totally devastated and confused until a old friend of mine told me about a spell caster on the internet called Dr. Raypower who help people with relationship and marriage problem by the powers of love spells, at first I doubted if such thing ever exists but decided to give it a try, when I contact him, he helped me cast a love spell and within 48hours my husband came back to me and started apologizing, now he has stopped going out with other ladies and his with me for good and for real. Contact this great love spell caster for your relationship or marriage problem to be solved today via email: Urgentspellcast@gmail.com or WhatsApp: +27634918117. Read more about him on his website: https://urgentspellcast.wordpress.com
Report
Nov 23, 2022 at 01:14 pm by Tom Peacock
My name is Tom Peacock from USA, I want to say thank you to Dr Emu for the good thing he has done for me, Though am not sure if this is the best forum to show my joy and happiness for what he has done for me but i can't hide my happiness and my joy so i have to share it with people, my marriage got crashed about two years ago and i tried all i could within my power but to no avail. I saw a post and testimonial about the good things Dr Emu has been doing so I decided to give it a try. though he is always a busy man but when he responded back to my email, he gave me 48 hours for my marriage to be restored really just like he said my marriage was restored since then I am happy and i am living happily i am so grateful to Dr Emu you can always email him here: {emutemple@gmail.com} or WhatsApp: {+2347012841542}
Report
Login or Register to post a comment