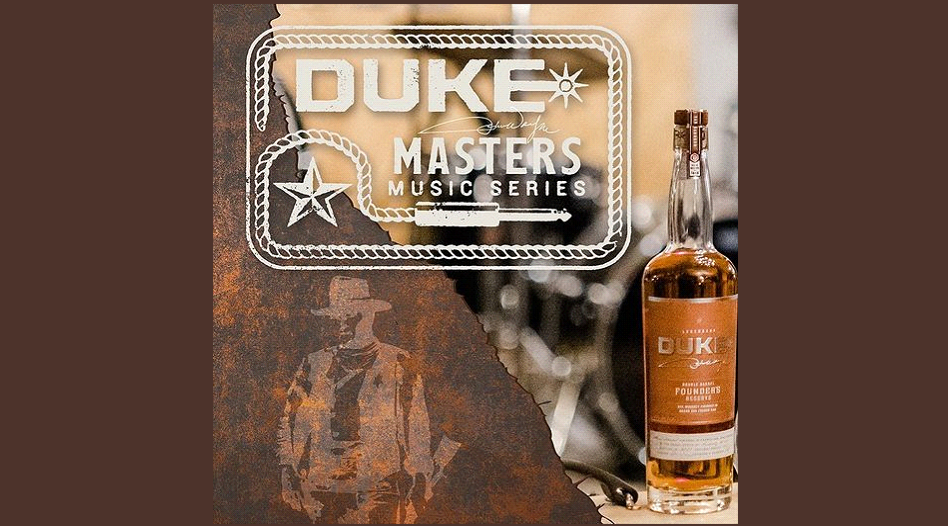 NASHVILLE, Tennessee —Launched on October 7th, Duke Spirits teamed with a talented group of artists for its latest project, The Masters Music Series.  Hosted by Runaway June's Jennifer Wayne, The Masters Music Series is a live performance video series that unites an accomplished group of musicians and writers, showcasing and supporting both emerging and established artists through various programs and initiatives. The series will release two videos each week on Duke Spirits' YouTube channel.

For the music-focused program, Executive Producer and Duke Spirits Founder Chris Radomski and Producer Austin Moody envisioned a sound that embodies the soul and pride of America, the same spirit personified by the legendary Duke, John Wayne. Combining their talents, passion for music, and ideals, this concept came to life inside Studio A at the iconic Sound Emporium Studios in Nashville, Tennessee.

The full circle moment is that Austin Moody is married to Jennifer Wayne who just happens to be John Wayne’s granddaughter.

Radomski met John Wayne’s son, Ethan Wayne, several years back when he was making wine in Napa Valley. They had recently discovered archives from his father’s estate that had not been seen since the 70s. They learned that Wayne had been working on his perfecting bourbon and tequila recipes.

He states, “We took the original notes, the bottles, and the archives and sort of reversed-engineered it.”

This led to Moody meeting up with Radomski in Aspen while he was doing a show. And even though Radomski is the producer of some of the finest spirits in America, he is passionate about music as well.

Moody reports, “He wanted to do a music series and the goal was to draw more attention to the Duke brand. He gave me full reign to do whatever I wanted.”

“Obviously I am a fan of John Wayne. I wanted to create something that I felt like he would sit back and listen to. As a man who valued quality and character, we had to make sure this sounded like we were making a record.”

That prompted Moody to compile a stellar backup band for the featured artists. He recruited Justin Weaver on guitar, Viktor Krauss on bass, Cactus Mosier (Wynonna’s husband) on drums, along with Josh Shilling and Jenee Fleenor - all sought-after staples of the Nashville music studios.

You add this band to the big artists who could “knock it out of the park” which makes the Duke Spirits The Music Masters Series something that will appeal to fans of all ages from all genres.

The YouTube videos are live tracks. They are not remixed in the studios. It’s what was happening at that moment. All artists are performing their original music, some new songs with old favorites.

Moody explains, “The cool thing about this project is that we gave the artists the masters. They actually own the recordings. If they want to release this music to DSPs like Spotify or Apple Music, then they can. The recordings are so good, quality-wise, it sounds like we made a record. It was so good that I was shocked.”

“I am extremely proud and honored to work with such a talented and giving group of artists," Radomski says. "We share common values and passions which are the foundation of America and represented by the soul of Duke Spirits. We hope The Masters Music Series will showcase great performances and provide a platform to support emerging artists.”

The Duke Spirits owner concludes, “We could have sponsored Coachella or Stagecoach, but I don’t see it as being as authentic.”

With The Music Masters Series, Radomski was happy to do something good to support these artists who have donated their time and time talent to the cause. They will continue the series for a second season next year all while supporting rising artists and various music charities.

You can view all the artists’ videos from Duke Spirits The Masters Music Series here.

Make sure and subscribe to the Duke Spirits YouTube channel to get all the latest videos as they are released.

ABOUT DUKE SPIRITS:
Duke Spirits is an artisan distiller crafting award-winning ultra-premium bourbon, rye, and tequila. Crafted from decades-old recipes and bottles from the archives of American icon John Wayne, Duke Spirits is committed to preserving the legacy of John Wayne and the great American ideals he stood for. For more information visit www.dukespirits.com. Must be 21+ to follow. Please enjoy all Duke Spirits products responsibly.

ABOUT AUSTIN MOODY:
Artist and songwriter Austin Moody knows in his gut when something looks and sounds just right, and now he's applying those skills to The Masters Music Series in his role as Producer. Growing up in the small town of Kingsport in East Tennessee, music has always been a large part of Moody's life, as he was constantly drawn to performing and eventually began writing his own songs. A chance meeting with Country music legend Marty Stuart during his high school years inspired him to move to Nashville, where he put in the work to launch his artistic career. During his years in Music City making his own records, Moody was drawn to producing and learning from masters of the craft like Tony Brown, Mac McAnally, and Keith Stegall. Those experiences honed his ability to step into the producer's chair himself, and he is excited to share this new project with Duke Spirits.

Nov 11, 2022 at 12:41 am by JadaSteng12
i just want to say a big thanks to Dr Dominion for what he has done for me, i contacted him at the point of my needs and he came through for me, he said he was gonna help me and he did, i played lottery for 20 years and couldn't win a dime, at a point i was disappointed and almost gave up, but then another thought came to my mind why don't i try a lotto spell since i have already heard about people doing it, and then i decided that i will give it a try, but there was a lot of spell casters online this got me confused that i didn't know which to pick, i decided to follow my instinct and i picked Dr Dominion i sent him an email and waited for couple of hours no reply, at this point i was already anxious and eager to get a reply from him and then i sent him a test on his WhatsApp and immediately he responded i told him what i wanted and he gave me assurance that i must win after his spell, i did what was asked of me, behold i hit the jackpot. i am so so happy to share this here because i have never seen a miracle like this before, thank you so much Dr Dominion you are a life saver. you can talk to him if you need his assistance too, that is why he said i should testify about his good work so people in need can reach out to him. his Email: dominionlottospelltemple@gmail.com website: https://dominionlottospell.wixsite.com/dr-dominion WhatsApp: +16574277820 Call: +12059642462
Report
Login or Register to post a comment