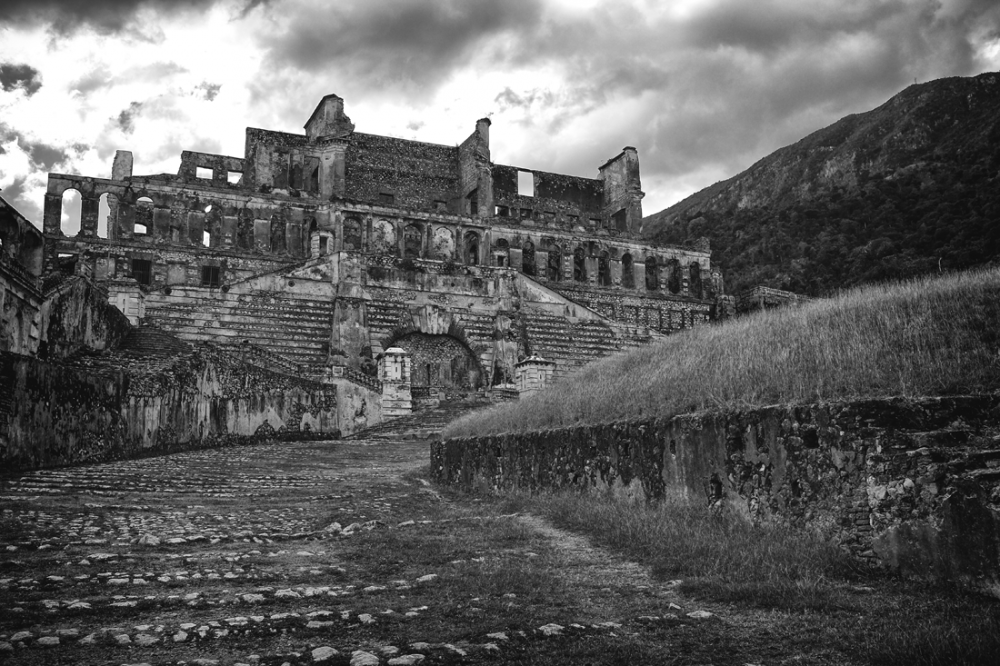 HAITI (above) - Around the world there are some amazing abandoned places. Some still standing today, while others have been overtaken by mother nature or commercial growth. Regardless, here are just a few that stand out - - some of which are within a short drive. The photo above this article is from Haiti. It is The Palace, which sits just below Citadelle Laferrière, a fort on a mountaintop in Haiti.

At the peak of the mountain, you will find the old Citadelle fort that still stands today (Photo of inside the fort below). 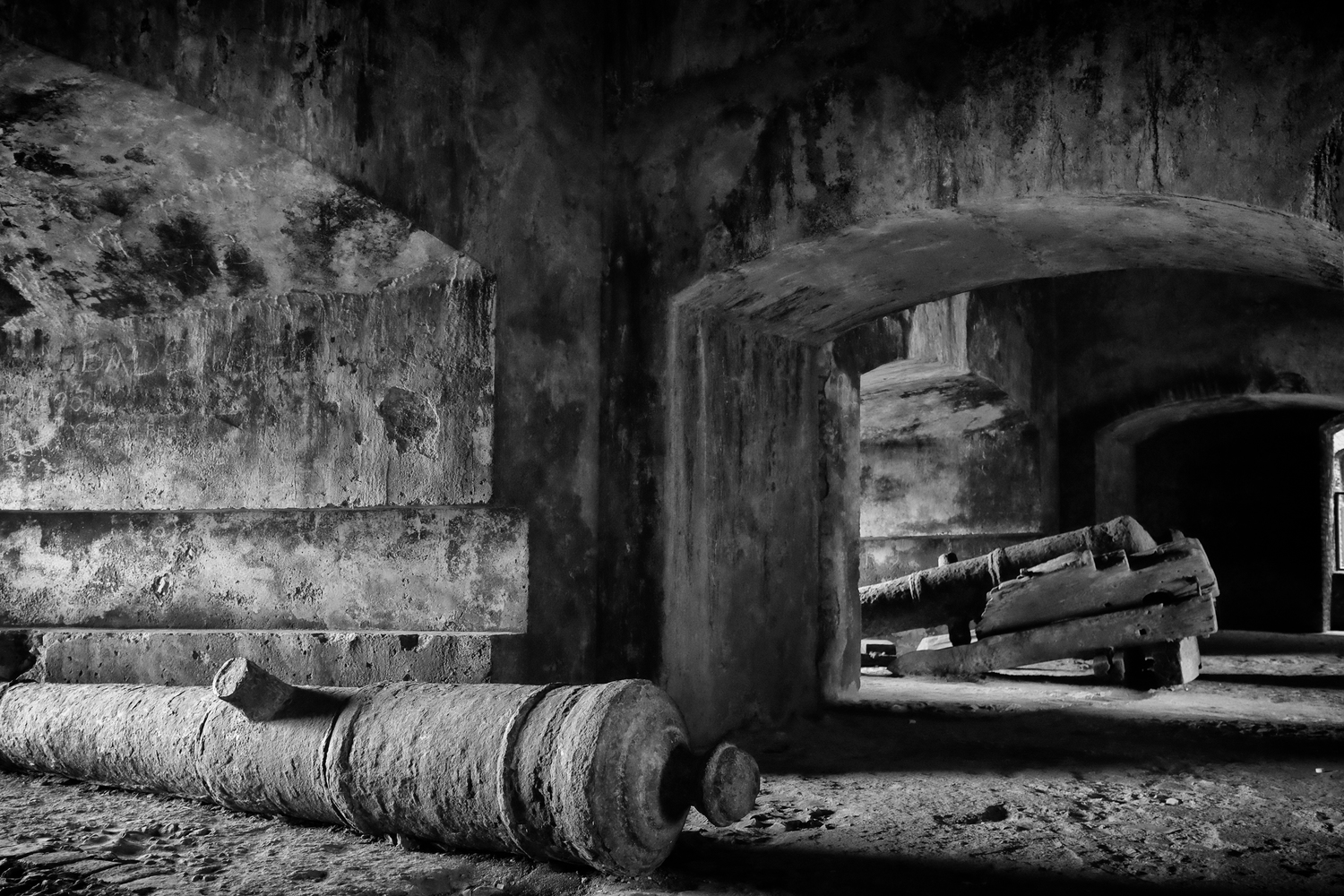 DETROIT - (Below Photos) In 2016, Detroit had more than 10,000 abandoned homes and was labeled as having the highest crime rate in America. However, it was almost poetic seeing architecturally beautiful 19th century homes falling apart in fields all throughout Detroit. Things have turned around somewhat, with abandoned buildings being purchased, torn down, rebuilt, etc. (Photo below). 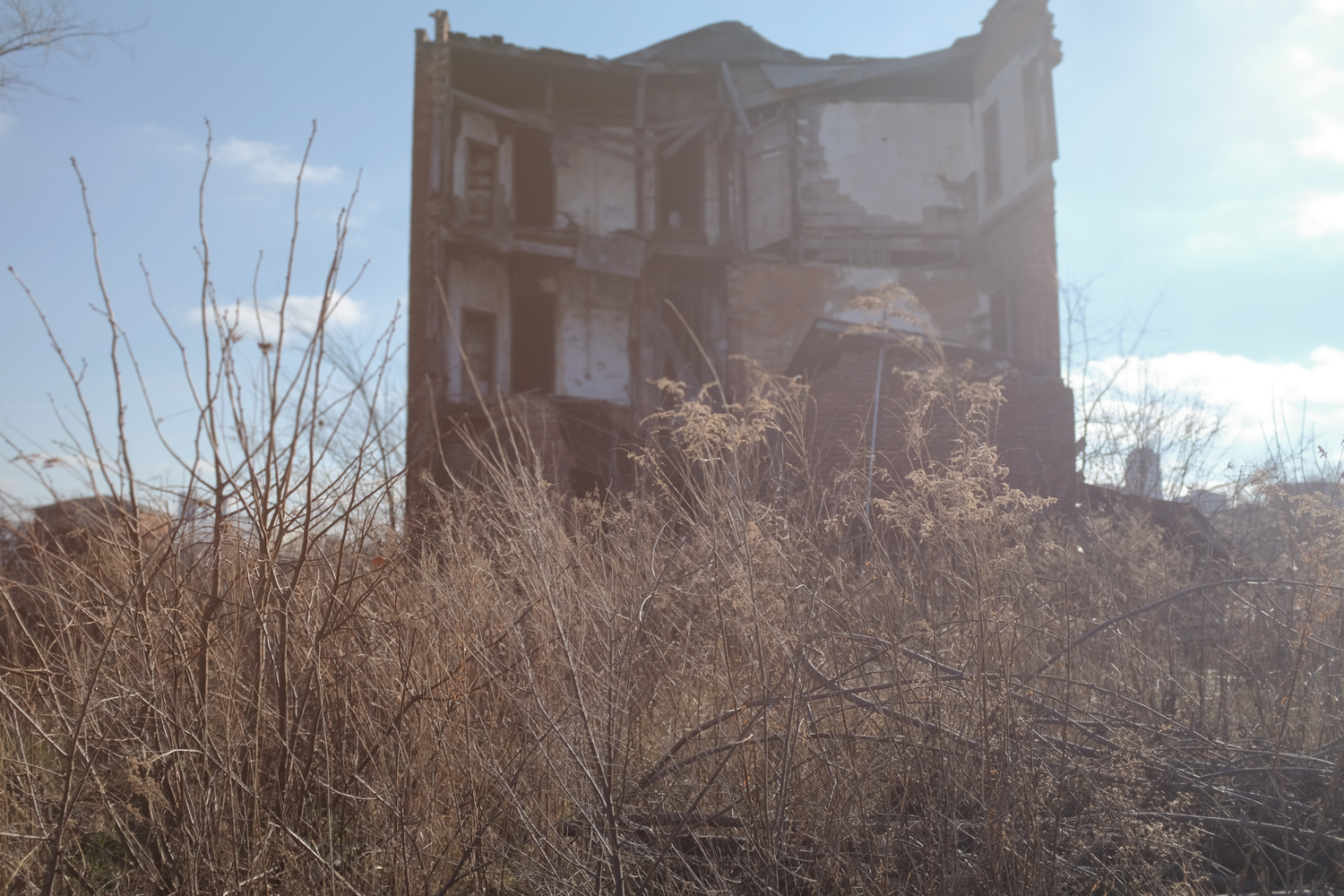 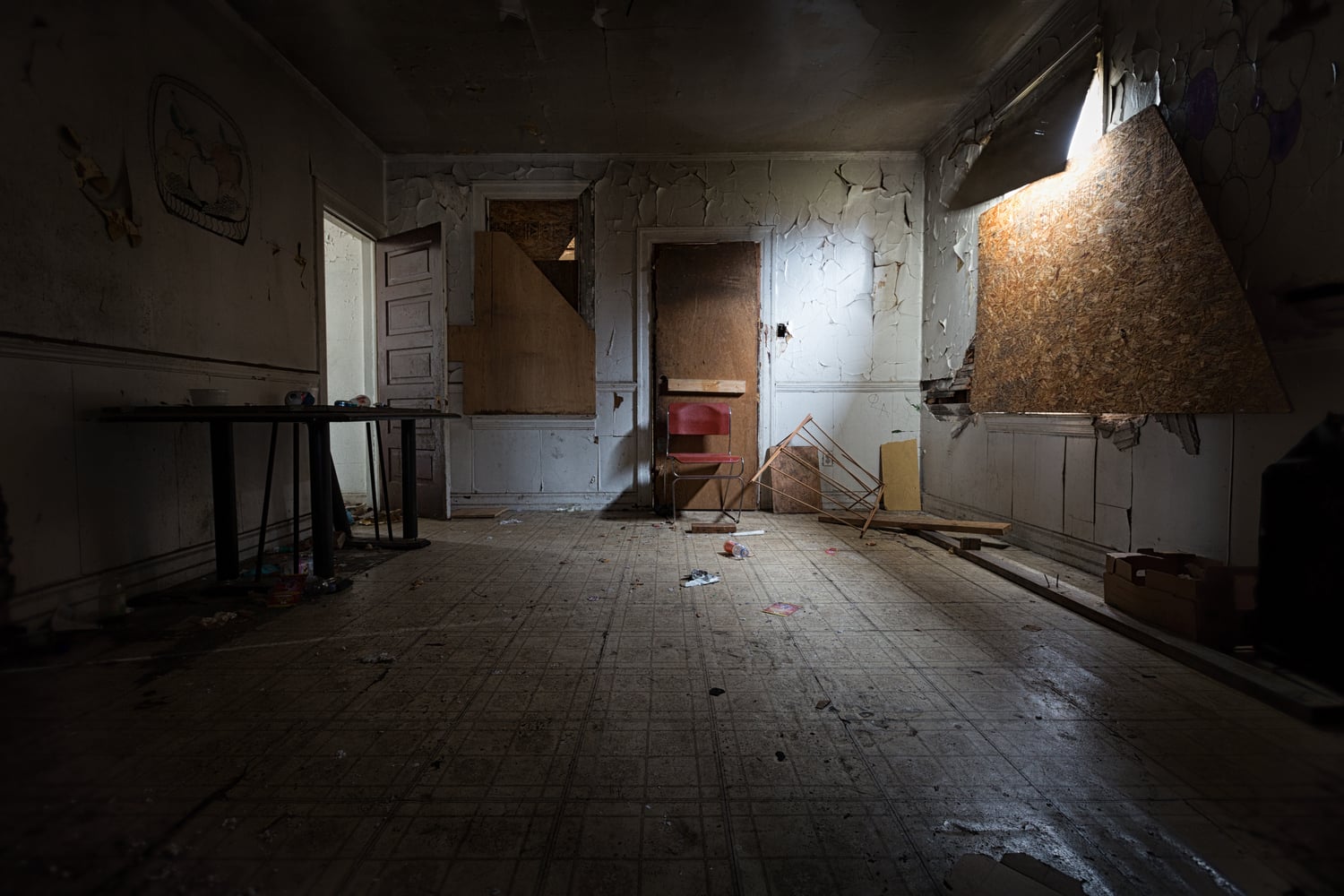 PACKARD PLANT -The Packard Plant (Photo Below) once sprawled multiple city blocks in Detroit and measured in at 3.5 million square feet. The Packard Company opened the plant to build luxury automobiles in 1903. At the time, the plant was considered to be the most modern automotive manufacturing facility in the world. Inside the multi-level structure, cars were moved from one floor to another thanks to massive elevators. Each floor included a large workforce to manually build different sections of the Packard automobiles. Most of the buildings were still completely intact in 2019. In July of 2022, the city approved to spend $1.7-million on demolishing a portion of the old plant (Packard Plant photos below by Scott Walker). 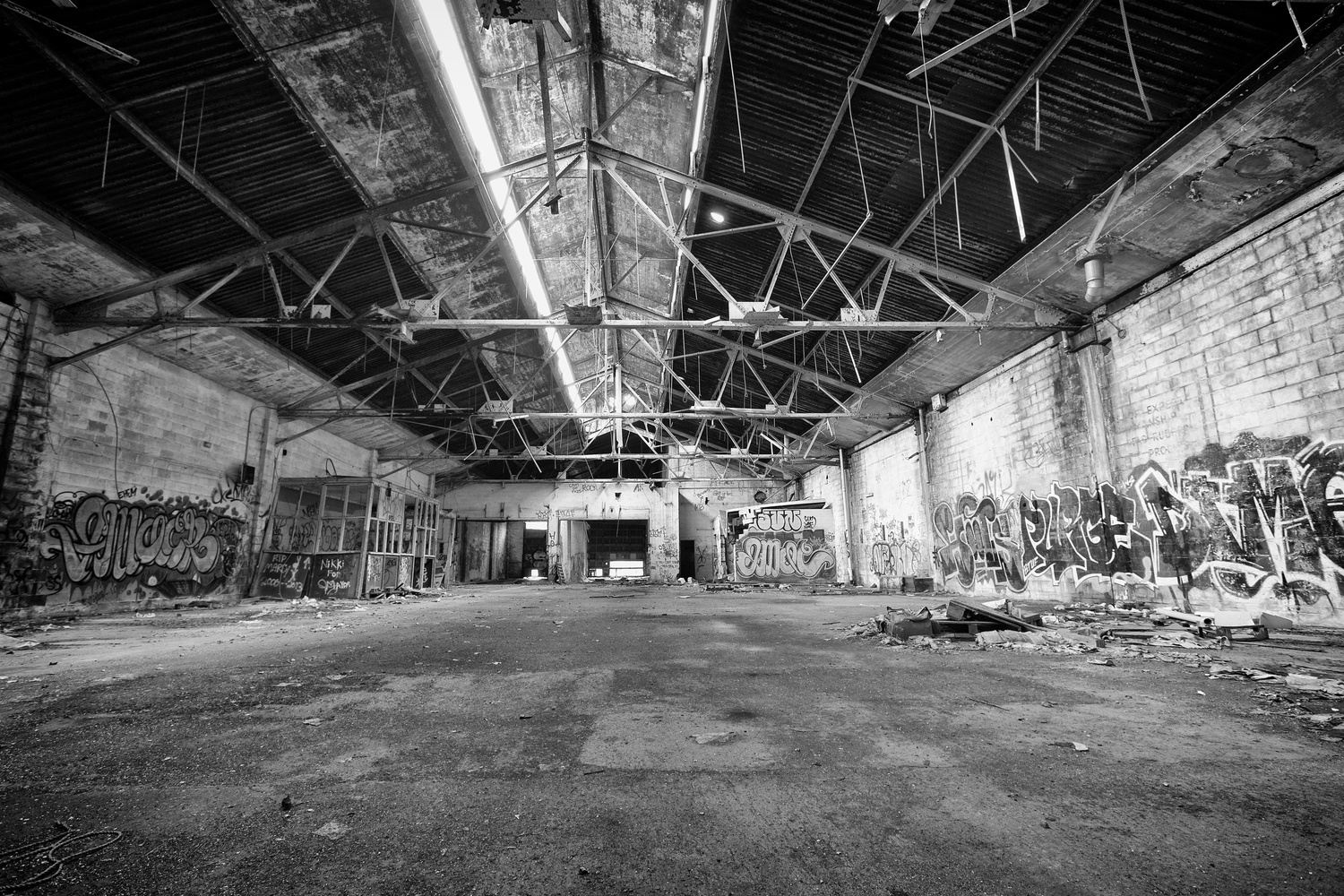 PSYCHIATRIC HOSPITAL - The Northville Psychiatric Hospital (Photos Below) opened in 1952 in the Township of Northville, about 30-minutes from the City of Detroit. The massive structure was built on 453 wooded acres and had 20 buildings that included a movie theater, a swimming pool, gymnasium and even a bowling alley. It was once known as a premiere psychiatric hospital with top notch care that utilized art and music to aid in treatment.

By the 1970’s, budgets for such hospitals were drastically cut and Northville’s high standing in the medical world started to collapse. The number of patients soared from 650 to 1,000+. To make matters worse, the hospital was designed to hold only 650 beds, so the bowling alley and gymnasium looked like a shelter for storm victims by 1971 filled with cots. Today, the Northville Psychiatric Hospital no longer stands (See photo below).

THE NATIONS - A lot of people have seen and talked about the massive mural on an abandoned concrete silo in Nashville (Photo Below), but few take the time to properly jump the fence around it. The mural is in an area that is called “The Nations.” Photo is below.

Let me back up a little… Many people see it, but do they see the side of it that includes two curious children with one reaching for the sky? Do people know why a man is painted on the front or why kids are painted on the side?

Australian artist Guido Van Helten is known around the globe for painting massive portraits that eerily look real. One of his famous pieces is located in an industrial area of Nashville near the old and shut down Tennessee Prison.

On the front of the Nashville silo is 91-year-old Lee Estes who is often referred to as LD. He grew up in the area around the massive silo. Mr. Estes is the kind of guy who volunteers to help others, is always walking the block to see what’s going on and more. But, why was he picked and why are two kids on the side of silo?

Mr. Estes represents the neighborhood, or so to speak. He represents the old, the original and the start of the area. Another question would be, “Why are kids on the side?” Simple, Van Helten painted two boys that live in the area to represent the new, the change, the growth of the area known as The Nations. 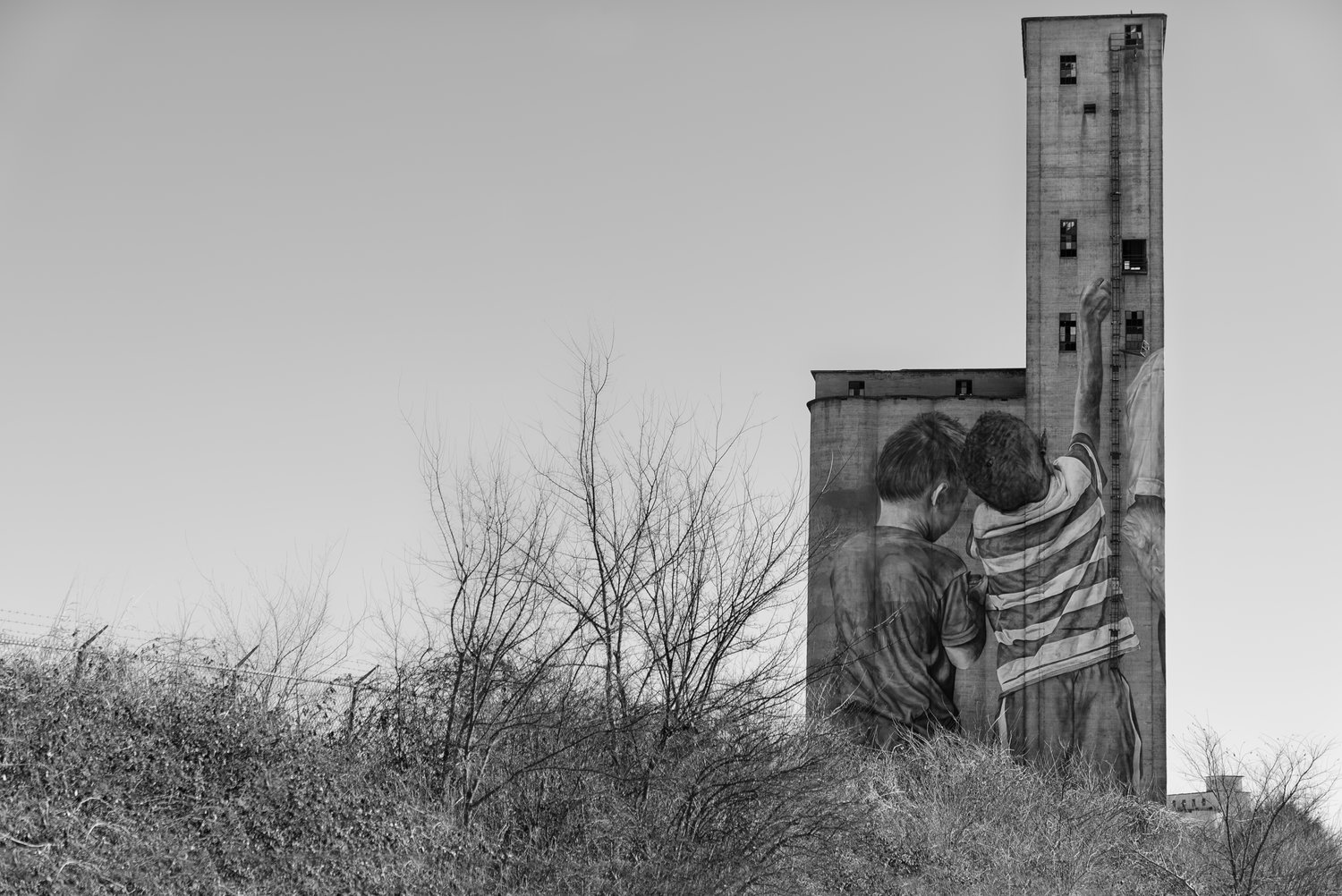 ORLANDO, FLORIDA - They quietly sit empty in the area around Orlando, Florida on a small and shallow lake. Urban decay, within a 20-minute drive of the magical Disney World (Below Photo). 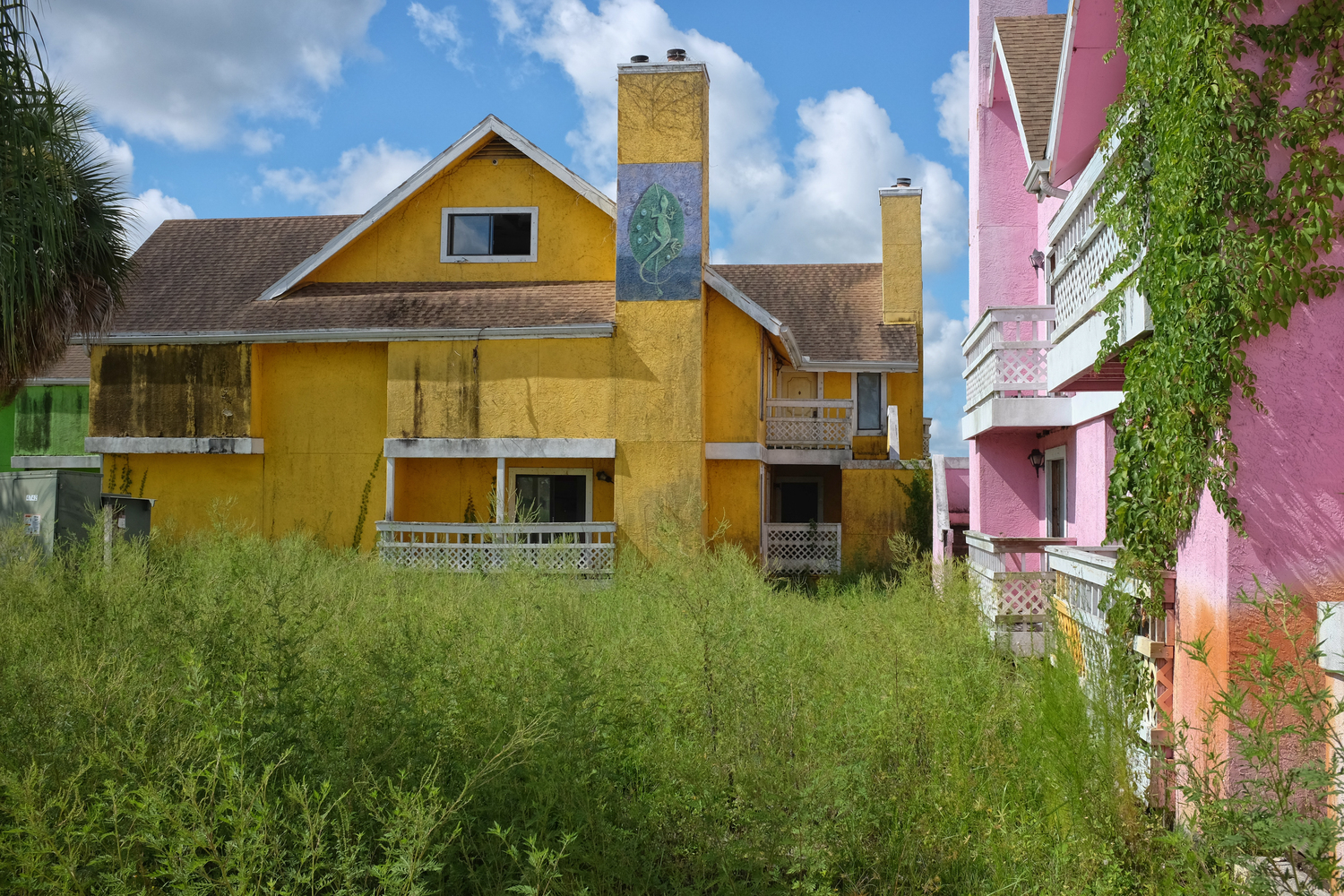 GUNTOWN - (Below Photo) Welcome to Guntown Mountain Amusement Park in Cave City, Kentucky... The park opened in 1969 and closed down a number of years ago. It was later purchased by a Louisville, KY businessman who had big dreams in 2015. Will Russell renamed the park “Funtown Mountain” and reopened it with the idea of a multi-million dollar renovation plan set for the near future. Today, it is no-more. 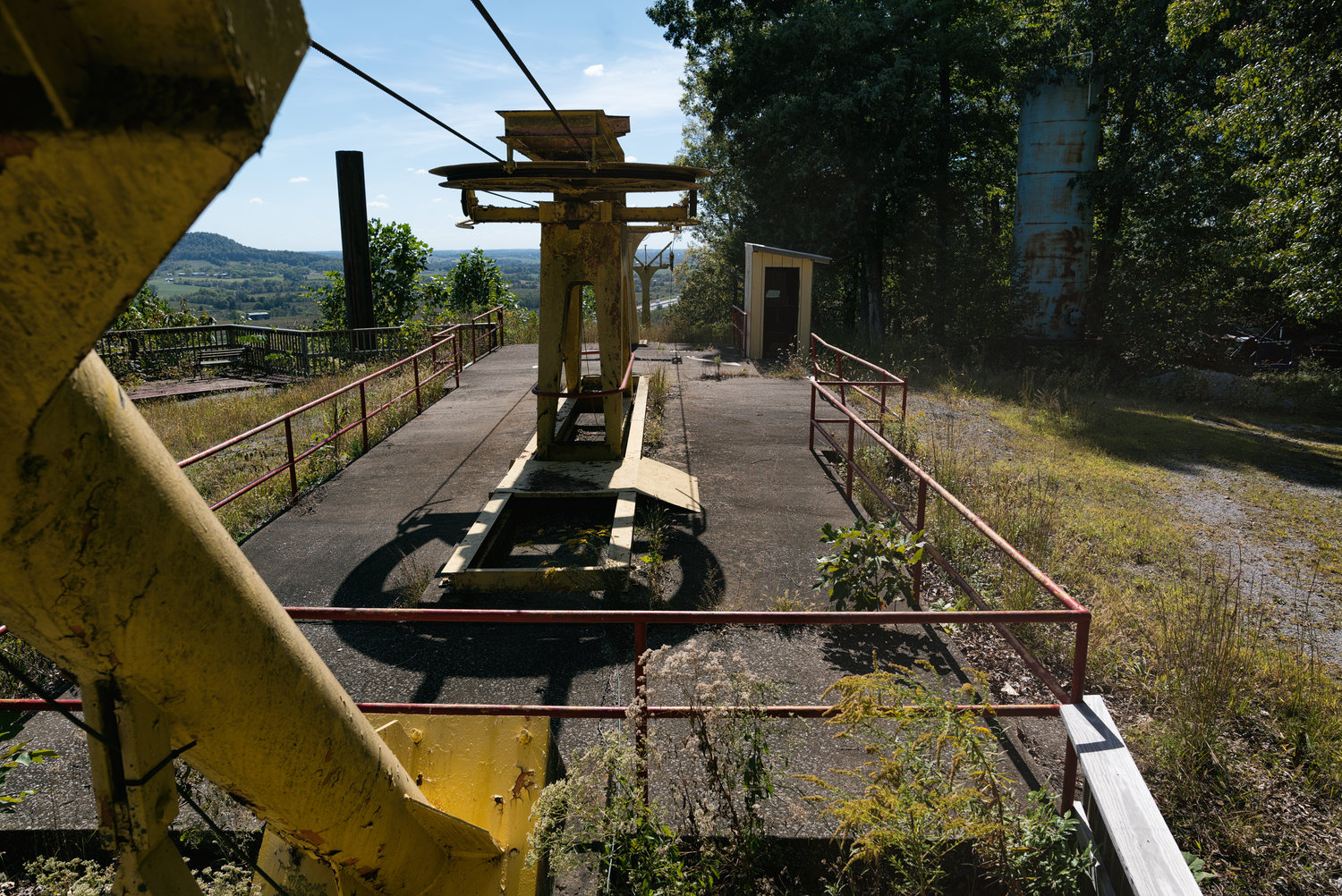 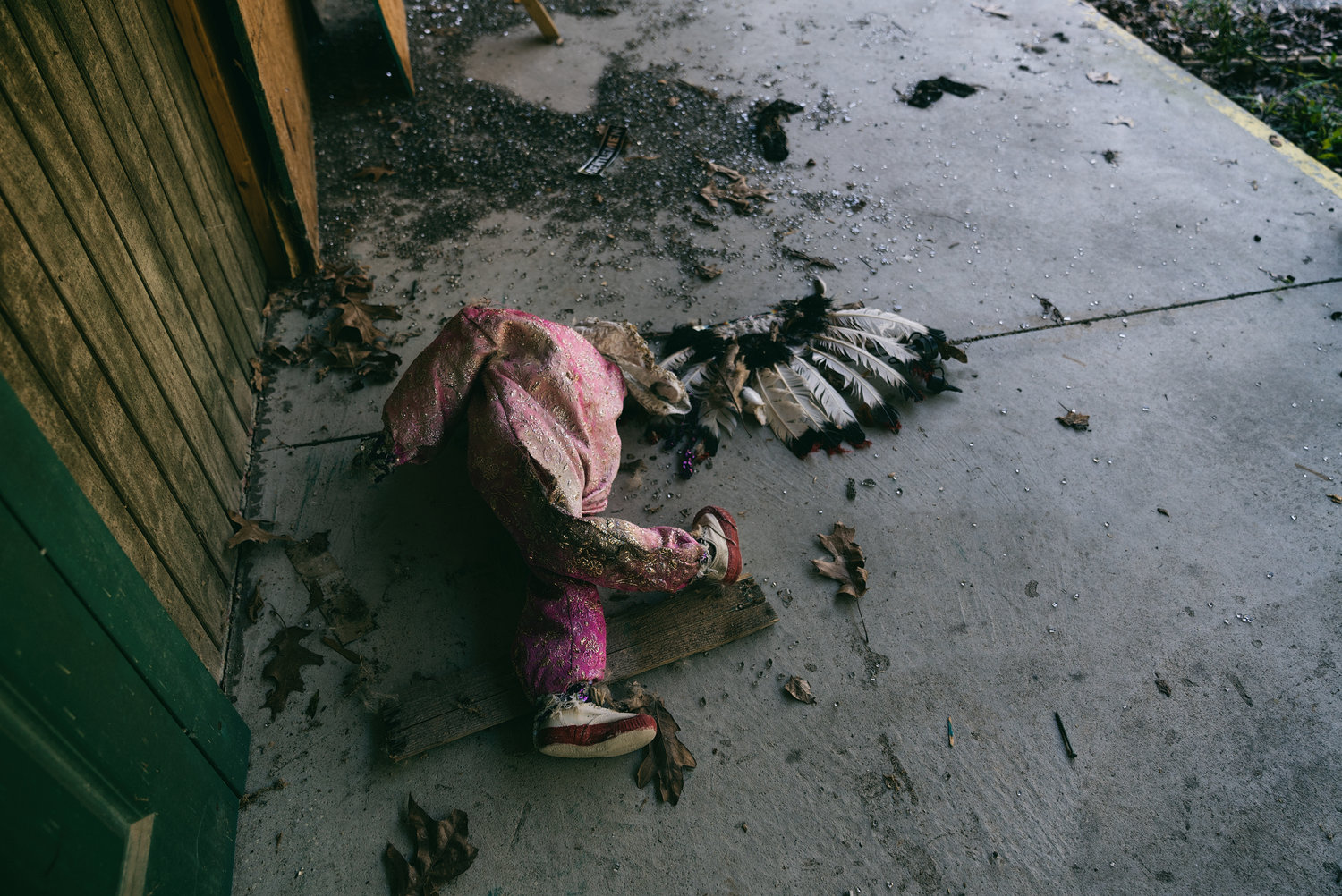 TENNESSEE PRISON - (Below) The old and now deserted Tennessee Prison opened in Nashville during the year of 1898. It later closed down in 1992. But, do you know why it shut down?

The prison shut down due to a class action lawsuit filed in 1983. The Federal Courts issued a permanent injunction that prohibited the state from ever putting another inmate into the old Tennessee State Prison.

The Grubbs V. Bradley case led to the determination that the conditions of living behind the walls was unfit for human habitation. Some prisoners had as little as 19-square feet in their prison cells.

Scotty Grubb and four additional inmates filed a suit on behalf of themselves and others being held in the prison in 1983. The suit alleged rampant violence, improper medical care, poor sanitation and overcrowding. Violence, according to court documents, included rape, robbery, stabbings, inmate vs. guard violence, guard vs. inmate violence and murder.

In the medical hospital on site, prisoners who were trustees were said to be involved in the direct delivery of health care. The inmates, who were completely exempt of certifications, licensure or training in the health care industry, assisted in examinations, surgeries, cleaning medical equipment, reviewing inmate medical records and more.

As a result of the court findings, the old Tennessee Prison eventually shut down (Photos Below). 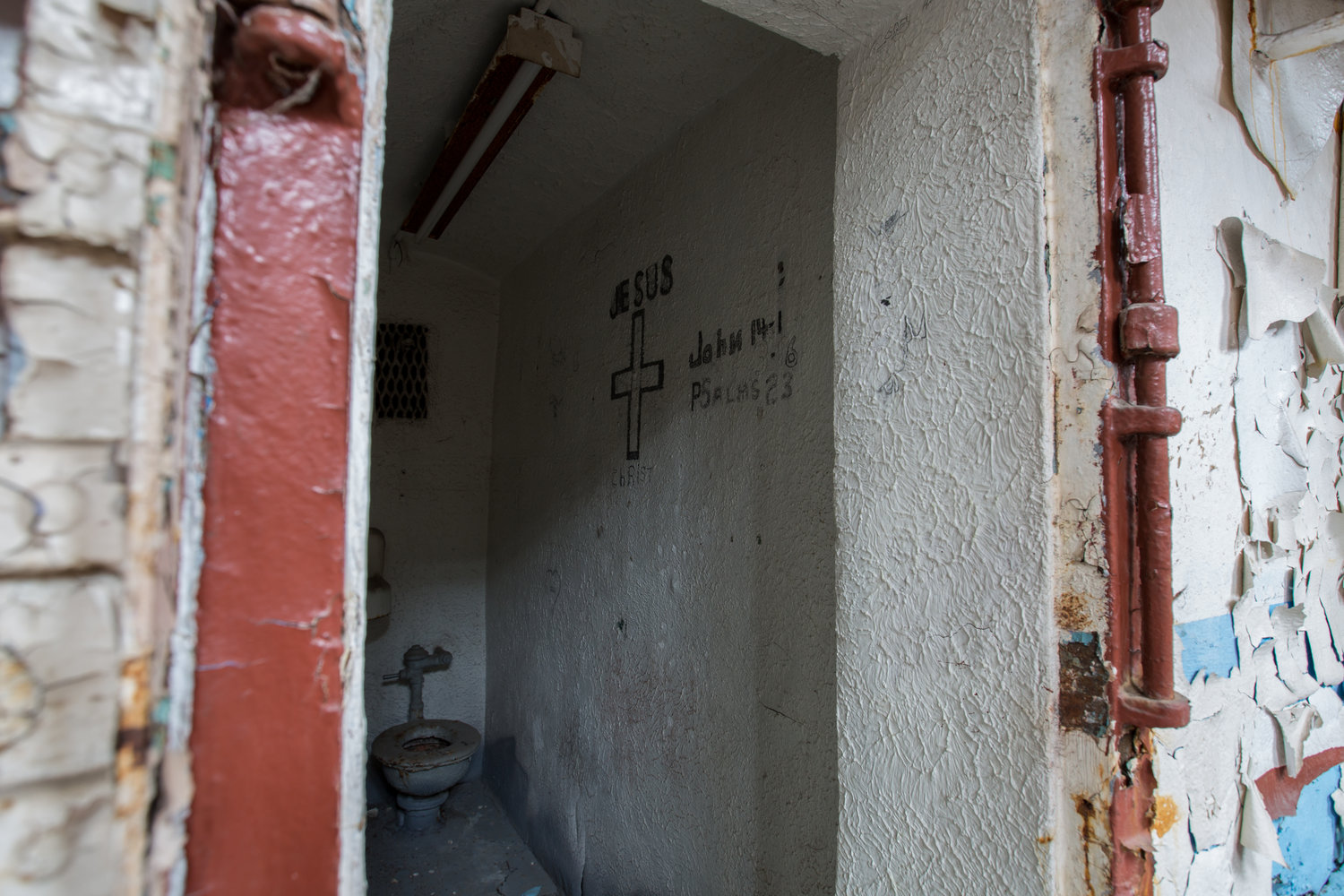 NUCLEAR PLANT - (Below) The Hartsville Tennessee Nuclear Plant is in Trousdale County, a county with a population of less than 2,400 residents. The Tennessee Valley Authority decided to build the massive nuclear plant on land directly next to the Cumberland River in the 1960’s. The idea was to construct four General Electric boiling water reactors to generate electrical power. The plant would heat water to the point of steam which would drive a steam turbine. Heat would have been produced by nuclear fission in the reactor core. The problem with the Hartsville Nuclear Plant, it never materialized. Construction got underway in 1975 and came to an abrupt stop in 1983. It was fully cancelled in 1984 (Photo Below). 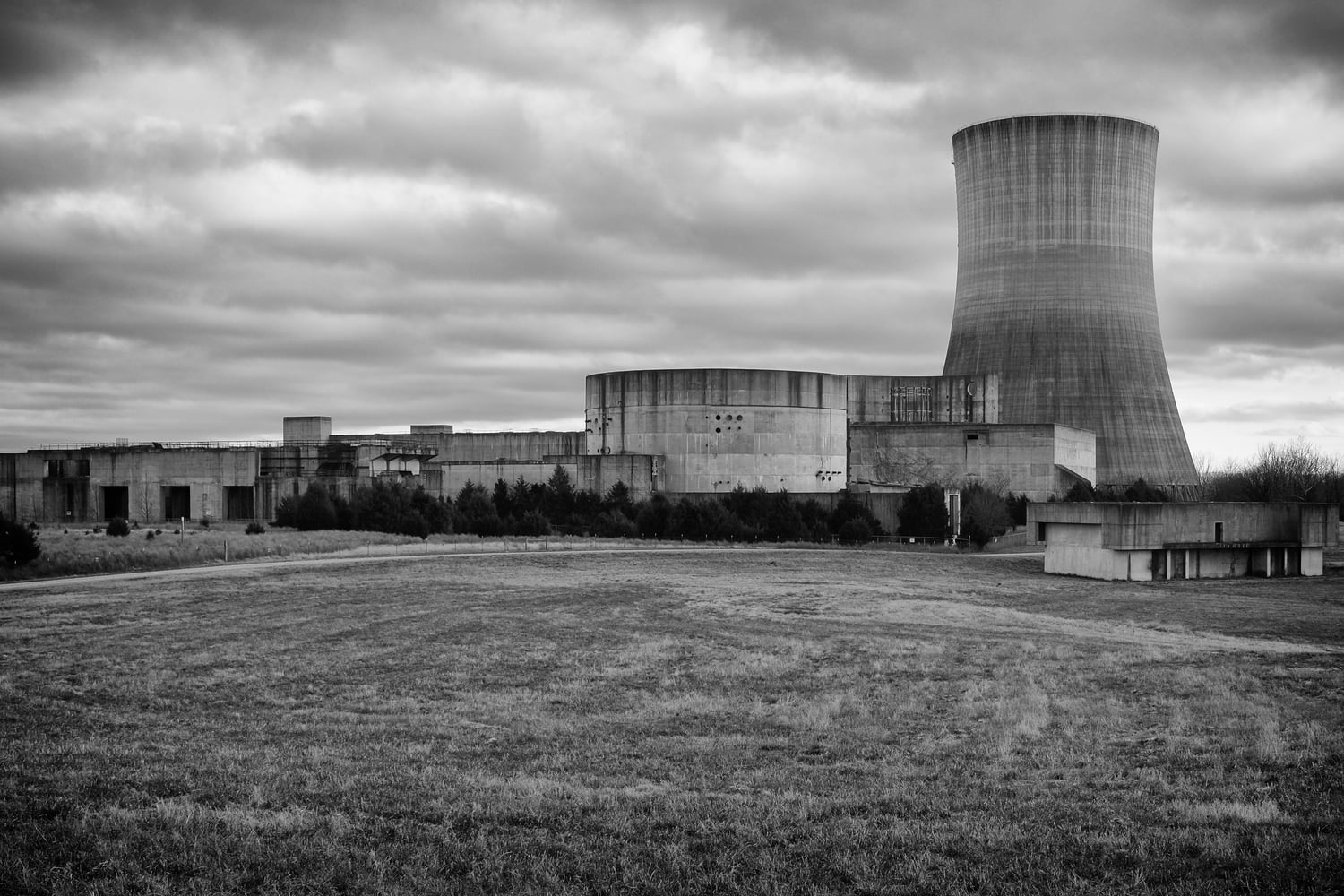 MISSISSIPPI - (Below) Not so deserted, but definitely different. This photo was captured in the Mississippi Delta, a distinctly hot, humid and dry area in the northwest section of the U.S. The Delta is between the Mississippi and Yazoo Rivers. The picture below was captured by photographer Scott Walker. 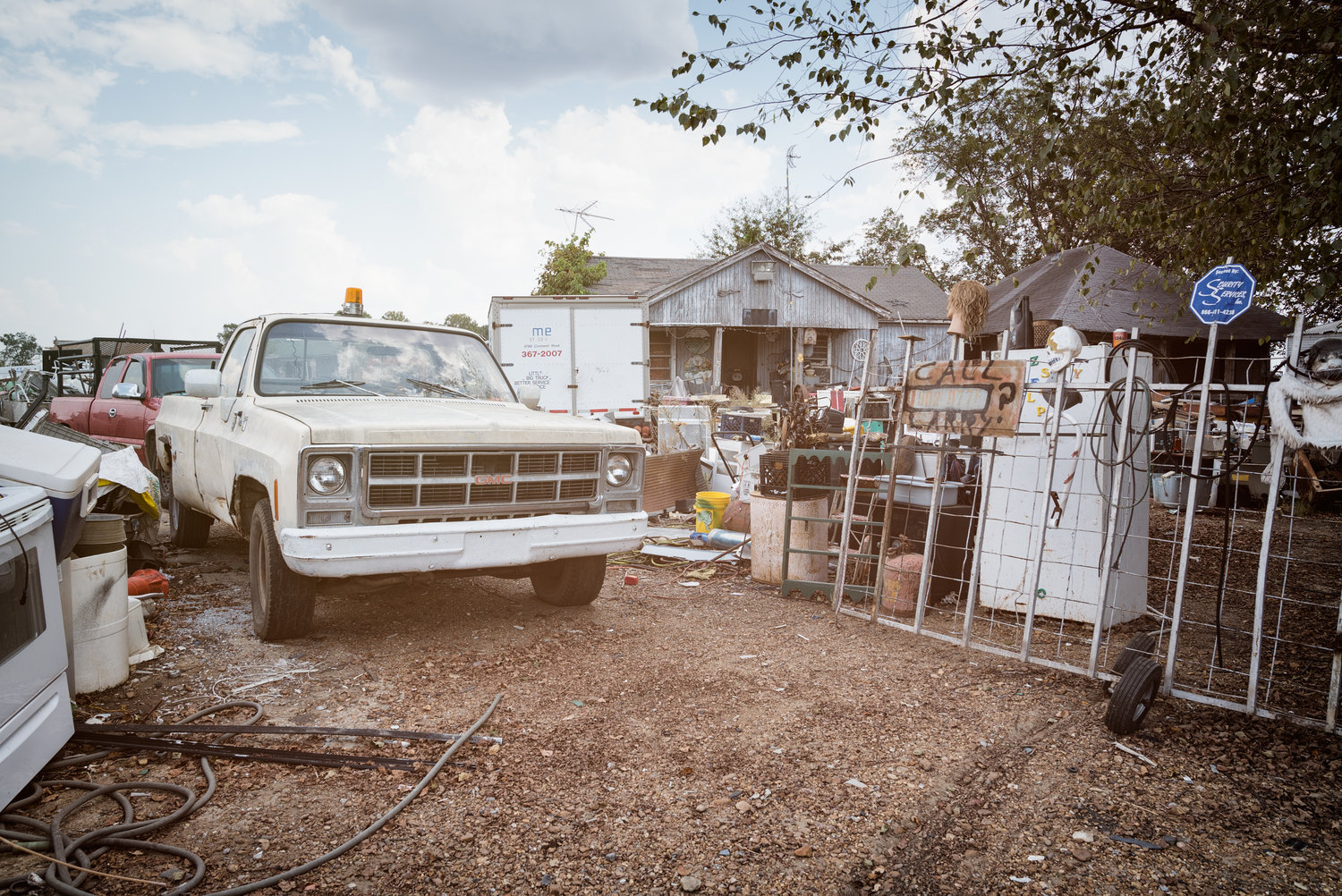 (ABOVE PHOTO) As you walked through his gate, an air raid siren sounded. Some of the signs on the fence along the road read, “No Trespassing, No Loud Music, No Loitering.” Other signs were simply pictures or stickers of an assault rifle.

All of the above photos were captured by Scott Walker. You can see more empty places, deserted and yet magnificent structures, at SmallTownBigWorld.com.