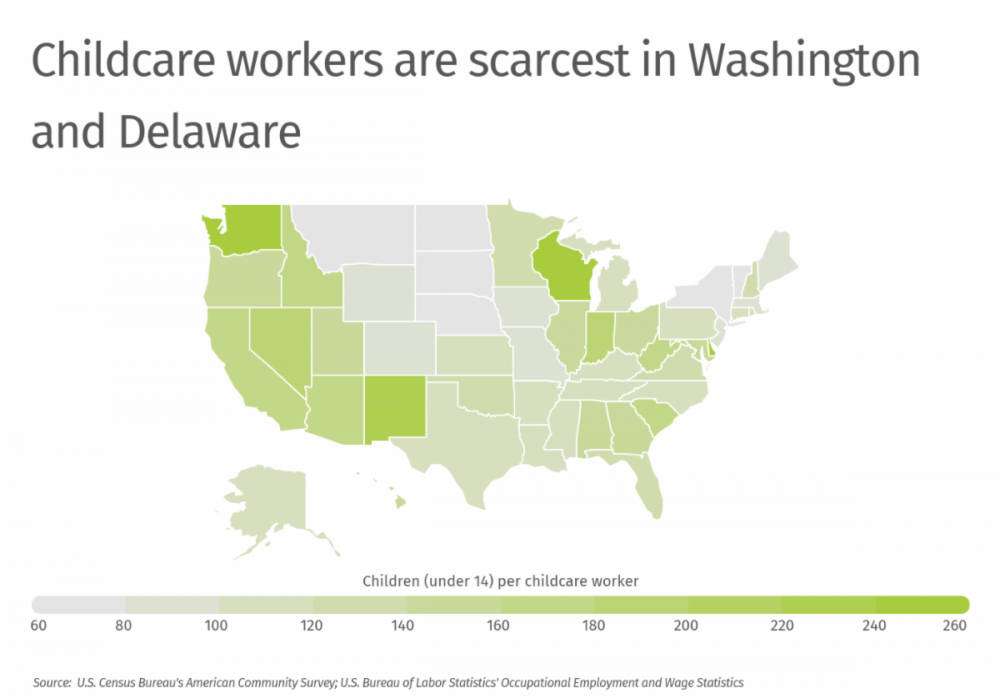 Over the last two and a half years, the COVID-19 pandemic put a spotlight on the importance of childcare to the U.S. economy.

Throughout the pandemic, stressed-out families struggled to find reliable childcare as many providers shut down abruptly due to COVID exposures. This forced many parents and caretakers to take unplanned leave, attempt to work and care for children simultaneously, or to leave the workforce altogether. Recent research from the U.S. Chamber of Commerce Foundation estimates that as many as 40% of parents have had job decisions significantly affected by childcare issues, while gaps in care result in hundreds of millions of dollars in lost economic productivity in each state each year.

Childcare is an industry that has long faced economic challenges. Many providers must survive on profit margins under 1%, even as the average family with young children pays more than 13% of income to childcare costs. And the difficult business model of childcare offers few solutions for the industry’s most significant challenge: hiring, retaining, and paying good wages to early educators.

Despite childcare workers’ vital role in the economy, compensation in the field lags far behind many other professions. A typical childcare worker in the U.S. earned an hourly rate of $13.22 in 2021, which equates to $27,490 annually for full-time workers. In comparison, the median wage for all professions was $22 per hour, or $45,760 annually—approximately 60% higher. Wages in early care and education are especially low given that most childcare workers have at least some college education.

Wages make it difficult for childcare providers to find and retain qualified staff. Many institutions of higher education steer students away from credentials that would lead to a career in the sector because compensation is so low. Estimates of employee turnover in childcare centers range from 26 to 40% annually. The pandemic exacerbated workforce challenges for the industry, as providers faced increased COVID exposure and employers in other industries saw significant wage increases.

The workforce shortage in childcare has left providers with insufficient staff to meet families’ needs. States vary widely regarding the minimum age a child must be to legally stay home alone—the highest, most restrictive limit being 14 in Illinois. According to data from the Bureau of Labor Statistics, from 2010 to 2019, the number of children under 14 per childcare worker in the U.S. increased from 99.6 to 108.4. With heavy attrition in the sector after the onset of the COVID-19 pandemic, that figure jumped to 122.9 in 2020.

Some locations have been able to better navigate the shortage of childcare workers than others. States in the upper central U.S. tend to have more favorable ratios, led by North Dakota and Nebraska at 48.8 and 57.2 children per worker, respectively. Several northeastern states including New York, Vermont, and New Jersey also have relatively low ratios. At the other end of the spectrum, four states—Washington, Delaware, Wisconsin, and New Mexico—have more than 200 children per childcare worker.

At the metro level, compensation may also explain why some cities have higher numbers of children per childcare worker. Many of the cities with the highest ratios have wages lower than the national median, and even the cities that defy these trends, like Seattle and San Jose, are high-cost locations where a childcare worker’s wages are not enough to live comfortably on.

The data used in this analysis is from the U.S. Bureau of Labor Statistics and the U.S. Census Bureau. To determine the locations with a lack of childcare workers, researchers at HowtoHome.com calculated the number of children per childcare worker and ranked them from highest to lowest. In the event of a tie, the location with the greater number of total children was ranked higher.

The analysis found that Tennessee has 110.0 children under the age of 14 for every childcare worker, compared to 122.9 children per worker nationally.

Here is a summary of the data for Tennessee:

For reference, here are the statistics for the entire United States:

For more information, a detailed methodology, and complete results, you can find the original report on HowtoHome.com’s website: https://www.howtohome.com/cities-with-a-lack-of-childcare-workers/