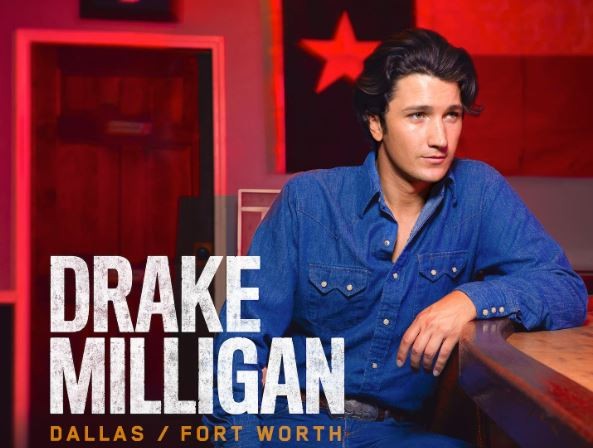 I get hundreds of emails each week regarding new music/artists. I know I’ve overlooked some gems accidentally. But one that did catch my eye (ears) was Drake Milligan. Whatever “it” is, he’s got it.

Milligan’s parents were big country music fans. They regularly listened to George Jones, Merle Haggard, George Strait, Alan Jackson, and others like them.

Then when he was 7 or 8 years old and saw an Elvis impersonator for the first time.

“He had the jumpsuit and was singing the songs. I had never seen anything like that,” he remembers.

He went home and found out about the real Elvis and watched all his videos and movies.

Even as a child, he realized that doing Elvis impersonations is something you could entertain with.

He practiced and entered contests, often winning for his act. From age nine to his teen years, he traveled as Elvis, entertaining crowds throughout Texas and the surrounding area.

“It was a great way to get on stage and learn how to entertain people. It was my summer job, and I could make good money doing it,” he recalls.

In his spare time, he would practice guitar, and it would always be country songs that he played. He longed to create his own music.

While there is a huge community of Elvis followers, they were very supportive as he made the transition from Elvis impersonator to country music singer.

He admits, “I still carry that Elvis Hits book. Obviously, I carry some of the moves and since I tried to sing like him for so long, I’ve had to learn to not sound like him. I’m carrying the torch but in a different way.”

In 2017, Milligan auditioned for American Idol and got through to the Hollywood round. However, he realized that he wasn’t ready because he hadn’t “done the work.” At the time he was new to Nashville and had not yet begun songwriting or done much studio work. He felt he wasn’t ready to be thrown on a massive stage, so he left the show before going to California.

After spending a few years “learning his craft” in Nashville, in 2021, the singer showed his roots in his original song, “Over Drinikin’/UnderThinkin” a tune that sounds like a mash-up of George Strait meets Midland. The song has everything we love about Texas country music.

By 2022 he felt he was ready for America’s Got Talent, (AGT) and bravely sang an original song that he penned; a contagious, rowdy anthem entitled “Sounds Like Something I’d Do” which got him a standing ovation from the show creator Simon Cowell and his fellow judges while winning the hearts of America at the same time. Howie Mandell even dubbed him “The Elvis of Country.”

You can hear a little more Elvis in the number he did for the AGT quarter-finals, “Let’s Kiss Goodbye All Night” which Simon deemed “the best of the night.” The singer appears as natural on stage as any I’ve seen.

He confirms, “I always get nervous before I go on, but once I hit that stage, I’ve got the best band in the world. Those guys are my friends and it’s kind of a comfort zone for me. I know I’m not in this alone. Once I’m in it and grooving, I feel pretty comfortable.”

His varied influences show up in his performances. He states, “I pick my Elvis moments. I pick my George Strait moments. I try to sprinkle all that in there. Elvis was a culmination of his influences. If you bring all those influences together, you can find your own sound.”

Regardless of what happens on AGT (be sure to log on and vote for him Tuesday night if you love him as much I do), Milligan is releasing his first full-length 14-track album, Dallas/Fort Worth, on September 15, a project on which he co-wrote every song.

The record title came from the area where he grew up.  He explains, “As a native son of the Dallas/Fort Worth area, I’ve always been intrigued by the difference between the two cities. First, there’s Dallas: a city determined to prove that everything really is bigger in Texas. Then, just 30 miles to the west, there’s Fort Worth: a city that holds true to its Stockyard roots with a taut rope around its cowboy brand. My goal was to bring those same distinctions to the two parts of this album. On Dallas, the songs have a little more polish on their boots. On Fort Worth, there are nods to those traditional Honky-Tonkin’, Western swingin’, cowboy culture roots that I’m based in.”

Produced by Tony Brown and Brandon Hood, Dallas/Fort Worth shows how the country crooner is a next-generation traditionist whose record gives “Texas twang a shot of energy.”

"As a lifelong Country music fan, it has been my dream to make a full-length record that pays homage to traditional Country roots, while still bringing new sounds and energy to the genre," says Milligan.

He continues, “Regardless of whether I win or lost (on AGT) I want to be focused on promoting my record and getting it out there. Either way, it’s a great time to release a record. A lot of people will be paying attention.”

No matter what, Drake Milligan is a name you will want to keep on your radar because this explosive country genius is just getting started. Be sure to check out his new record and follow his website for his extensive touring schedule.