The Human Spirit, Hope and What Matters Most 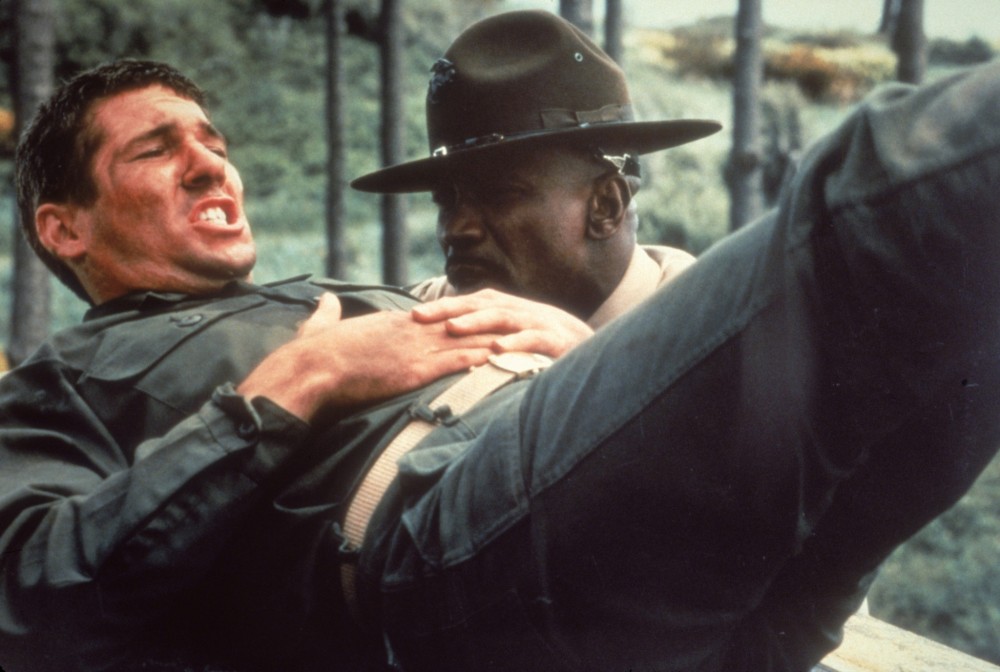 The 1982 film, An Officer and a Gentleman, starring Lou Gossett, Jr. and Richard Gere tells the story of Zack, a young Navy cadet and his struggle getting into Officer Candidacy School. His Marine Gunnery Sergeant makes it clear that the program is designed to eliminate as many cadets as possible, so that only the best will remain and achieve a commission as Officer.

The grueling process of forcing candidates to confront every conceivable, emotional and mental “chip on the shoulder” which might sabotage their leadership ability, is portrayed formidably in the scene above where Lou Gossett, Jr. has ordered Richard Gere to perform innumerable push ups and sit ups while berating him to quit, submit a Drop On Request and get out!  And the heart of the man committed to his pursuit is finally able to find voice with an emotional response to personal threat. He does so by staking authority for his claim to OCS by virtue of having nowhere else to go. This strength of personal resiliency of spirit and obedience to his heart brought him not only a different identity, but a different life and love as well.

The human spirit – that invisible, yet undeniable and constant companion often recognized as a sort of divine “bearing” that becomes the gift through which we are able to overcome obstacles, crawl out of chaos, restore what was ruined and find hope when every glimmer of it had been shut off or blown out. It is the quiet confidence that defies odds by believing  “I will” when everyone else believes  “You won’t”. It is the one voice you can hear when all others have been silenced and the clutch of that grasp that won’t let go when someone we love wants to. It is the miracle out of malaise, the life we live and die for, the truth we long for. It is what we see lovingly bestowed in the finger prints of beauty and goodness throughout history, gently bringing us assurance, that this spirit is never far away.

For those of us who appreciate history, we probably are aware of ancient St. Stephen’s cathedral in Vienna. The cathedral was originally founded in the 12th century. It is an extraordinarily beautiful cathedral, known for its richness of wood carvings, altars, sculptures and paintings. Like all of life on this earth, it has not stood clear from the path of harm, either.

First, in 1258, a fire that swept through Vienna and virtually destroyed all of Stephansdom. It wasn’t until over a hundred years later, that what was left of the cathedral’s ruins, were replaced by a gothic building. Then about a hundred and fifty years later, in 1683, the cathedral suffered terribly again during the Turkish siege. For the following three hundred years, relative peace existed, until World War II, when in 1945 the cathedral suffered from attacks by Russian and German armies. Finally in 1948 the cathedral was again restored and reopened. Today, St. Stephen’s is recognized as one of the greatest Gothic structures in Europe. And the depth of her beauty brings resilient hope, perhaps in even a more meaningful way, with all she has been through.

Resiliency, in the midst of personal and cultural chaos, as we have experienced in our own country over the past two years, is not easy. We naturally want to perennially enjoy peace and safety while maintaining the control to able to avoid or get rid of anything and everything that would interfere with our happiness and ease of living. But perhaps that spirit of resiliency, that divine “bearing”, is the one we come to realize as revealing to us an awareness of Divine presence, in the midst of our own chaos. Perhaps too, this Divine presence offers and invites us to something else – other experiences, where we see finger prints of beauty and goodness, bringing meaning to the messes, and helping us understand what it is that matters most – that being love. So that when disaster strikes, relationships break, cultural and personal wars break out and life looks fragile, tentative and bleak, we experience a love we have never known before step in and gently hold us.

Love. It’s what holds on. It’s what repairs. It’s what restores. It bears. It believes. It hopes. It is the unseen made tangible in the fingerprints we see and we remember – the same ones that get more beautiful with time, because they remind us of the reality of hope – both now and forever. And in honor of Labor Day, may we rest, in love, refusing to submit, a D.O.R. (Drop on Request)

Below are the lyrics to a song by Wes King, reminding us of our faith, and love that matters most.

Inhabit the trembling yet be brave,
Embrace your weakness yet be strong
Say what you have to say
And always admit when you’re wrong
Accept who you are but
Keep striving to become
that which you’ve been declared
Be strong yet bend with the wind
Mourn yet never despair

The opinions expressed in The Conversant Counselor’s Blog are those belonging to Paulette Jackson LPC-MHSP and do not necessarily reflect those of any other professional or individual.

photo credit from the movie, An Officer and a Gentleman. MV5BMTQ5NDE4ODg0OF5BMl5BanBnXkFtZTcwNjAxODI0Ng@@._V1_.jpg