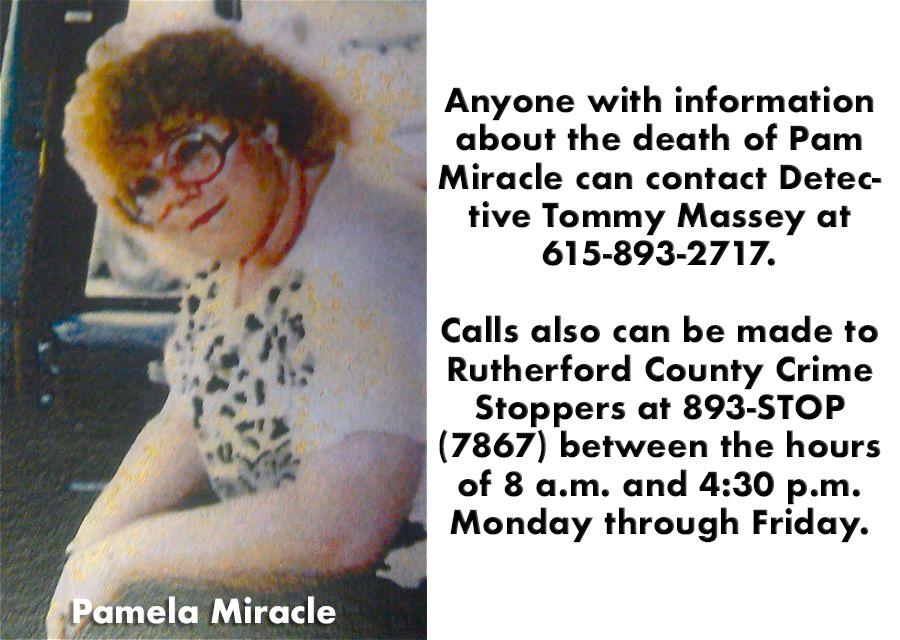 Miracle disappeared from Murfreesboro in July 1991. It was 10 months until her body was found on an access road to Interstate 24 near Smyrna.

The case stalled more than two decades ago until Murfreesboro Police Detective Tommy Massey began rebuilding the jigsaw puzzle when he found a video of the crime scene in 2014. He talked to co-workers, friends and anyone he can find who had contact with her in the days before her death.

In the process, he found a video of the site where Miracle's body was discovered.

"It's like reassembling a puzzle, and you need every piece to make it come together," Massey said in a recent interview with Middle Tennessee Mysteries.

In a 2014 interview with The Daily News Journal, Miracle's cousin Nicky Binkley said she didn't just lose a family member, she lost her best friend and peace of mind.

"I personally lost someone tragically, that was so very close and dear to me. So to say how it has personally affected me, I don't think I could answer that question truthfully, as I have honestly been on a roller coaster of emotions for 20-plus years," Binkley told The DNJ, saying they were more like sisters than cousins.

Miracle's body was found in May 1992 on an access road in Smyrna, more than 10 months after she

Miracle was last seen alive Thursday, July 25, 1991, when she left her job as a nurse's assistant at the Boulevard Terrace Rehabilitation and Nursing Center in Murfreesboro.

She got off work around 11 p.m. and her live-in boyfriend, Clarence Parker, picked her up from work because the couple only had one car.

He told police he would pick her up from work in his taxi cab and take her to the cab company where he worked so she could take their shared 1976 Pontiac Astre home.

Miracle was reported missing Aug. 9, 1991, not by Parker, but by her boss at the nursing home after Miracle failed to pick up her paycheck.

The Pontiac was found Aug. 27, 1991, behind a bar where it may have been parked since Miracle went missing, Massey said.

It wasn't until May 1992 that Miracle was found, badly decomposed, on an access road next to Interstate 24 in Smyrna. Massey said the victim was beaten and unrecognizable.

"There is someone out there who knows what happened to her," Massey said.

The investigation since 1992 has centered around Clarence Parker, Miracle's boyfriend at the time of her disappearance.

He has been questioned several times over the years, most recently in 2014 by Massey. Over time Parker has been consistent in his story: She left and he hasn't seen her since July 24, 1991.

Massey said detectives immediately became suspicious of Parker because, first Miracle's purse and other belongings were still in the home she shared with Parker, second he didn't report her missing, and finally the couple had a history of domestic abuse.

“It appears that they had a pretty turbulent relationship and that there was quite a history of violence between the two,” Massey told WMOT in 2014.

After the case was reopened, Massey interviewed Parker again. This time in Oklahoma where he had relocated but Parker stuck to his story.

Massey said he still doesn't have all the pieces he needs to finish the puzzle of Pamela Miracle's death.

He had hoped a new video of the discovery of her remains would lead to a resolution, but no such luck.

“I feel for the family,” Massey said in a recent interview with Middle Tennessee Mysteries.

Anyone with information about the death of Pam Miracle can contact Detective Tommy Massey at 615-893-2717 or tmassey@ci.murfreesboro.tn.us. Calls also can be made to Rutherford County Crime Stoppers at 893-STOP (7867) between the hours of 8 a.m. and 4:30 p.m. Monday through Friday. All callers remain anonymous.