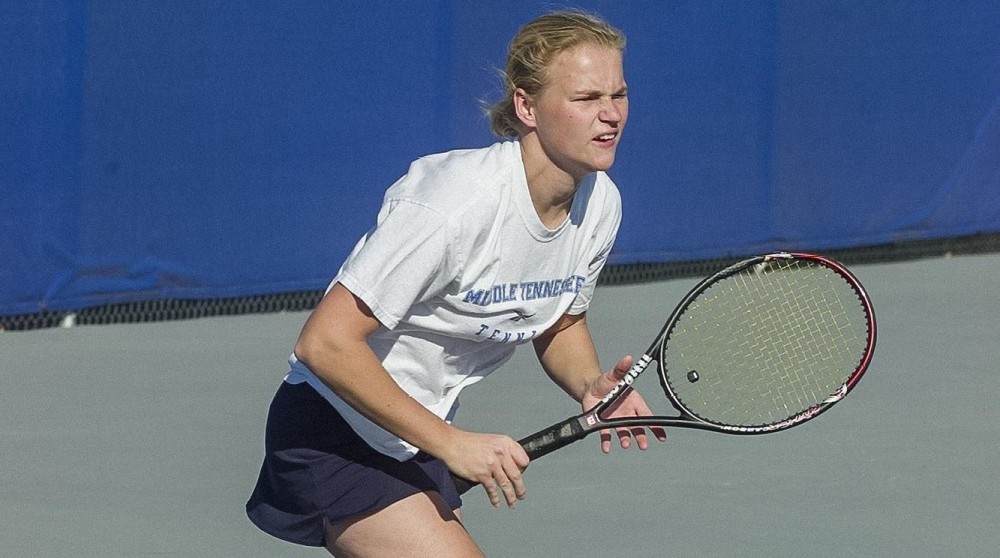 Middle Tennessee has inducted a handful of its all-time greatest tennis players into the Blue Raiders Sports Hall of Fame in the last few years. The newest may be the best of the bunch.

Manon Kruse will join six other former Blue Raiders in the 2019 Blue Raiders Sports Hall of Fame class. She's the most-decorated MT tennis player ever, competing in the NCAA tournament in singles and doubles three straight seasons, earning ITA All-American doubles honors in 2004 (she and partner Carien Venter are the only Blue Raider women ever to do so) and netting an incredible eight All-Sun Belt Conference awards (both singles and doubles all four years).

It's hard to believe that when Kruse stepped onto Middle Tennessee's campus for the first time in the fall of 2000 she had never played on a hard-court surface. Nor had she been away from her hometown of Hamm, Germany for more than a couple of weeks, and to make matters more difficult, the coach that had recruited her, David Thornton, left that fall, leading to the hire of Randy Holden.

"When I arrived ­— actually, it was on my birthday, the 22nd of August in 2000 — I was a bit overwhelmed by the whole situation," Kruse admitted. "I arrived in Murfreesboro before the school year started and was a bit alone the first two-three days. But, I did meet Carien Venter and her mom. Carien was from South Africa, and it was also her first time in the U.S. Who would have thought that later on, we should become the first female All-Americans at MTSU together?"

Venter and Kruse quickly struck up a friendship that would lead to unmeasured success in Blue Raiders women's tennis, and they immediately started working on understanding the language being spoken around them.

Kruse had a decent grasp of English when she arrived in Murfreesboro. The problem was, the English she had been taught in school was British English, so she had to learn how Southerners speak, a challenge in its own right.

"We learned British English in school, and the first three weeks in Tennessee showed me that this was not the language that I had learned," she said. "People would simply ask me how I was, and I just tried to smile and nod, because I had no idea what they meant by 'How you doin?' drawn out with a thick Southern slang. Looking back, I really have to laugh about this often."

A bad ankle injury limited Kruse to a handful of matches in the fall of her freshman season, but she came back in the spring with a vengeance. She went 14-10 with partner Stacy Varnell in doubles and 12-9 in singles, winning a handful of matches against ranked opponents and showcasing a mass amount of potential that would be realized the next season.

While Kruse didn't personally know where she stood amongst the ranks of the nation's best going into the fall of 2001, her sophomore year, she quickly found out.

"In the fall of my sophomore year, I won the tournament at the UNC Wilmington and the one in Furman, both in singles and doubles. These wins came to me as big surprise and gave me a lot of confidence," Kruse said.

That confidence carried over to the spring, when Kruse went 24-6 in singles and 30-8 in doubles (MT single-season doubles wins record), advancing to the second round of the NCAA doubles tournament with Varnell and finishing ranked No. 43 in singles and 19 in doubles, both the highest in program history at the time.

Another ankle injury hampered Kruse in the fall of her junior year, and though she advanced to the NCAA tournament in both singles and doubles again, she didn't have quite the success she had as a sophomore. That made her senior season all the more important, and, finally healthy, she showed what kind of player she could be.

After a strong fall, everything came together for Kruse in the spring of 2004. She started with 11 consecutive singles wins, and after splitting her first two doubles matches with her new partner, Venter, the duo went on an unheralded 20-match winning streak.

Kruse breezed through the Sun Belt Championships in singles and doubles before becoming the first — and still only — MT woman to win a match in the NCAA singles tournament. She and Venter also beat their first-round opponent before Kruse's Blue Raiders career ended in the second round in both singles and doubles.

In her senior season, Kruse finished tied for fifth on MT's single-season singles wins list with a 26-6 record and seventh in doubles with a 26-4 mark. She was ranked 38th nationally in singles and 10th in doubles, earning All-American honors with Venter.

"I remember sometimes I caught myself looking at the wall at the tennis courts and reading the names of Daniel Klemetz and some others as MTSU's male All-Americans," Kruse said. "I always wanted to get my name onto that wall, and I wanted to become the first female tennis player at MTSU to become an All-American. For me, it was even more special that I could share that with Carien Venter, the first girl I met when I came to the U.S."

Without a doubt, the German who couldn't understand Southerners and had never been to the U.S. sure made a name for herself as a Blue Raider. 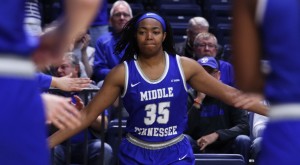