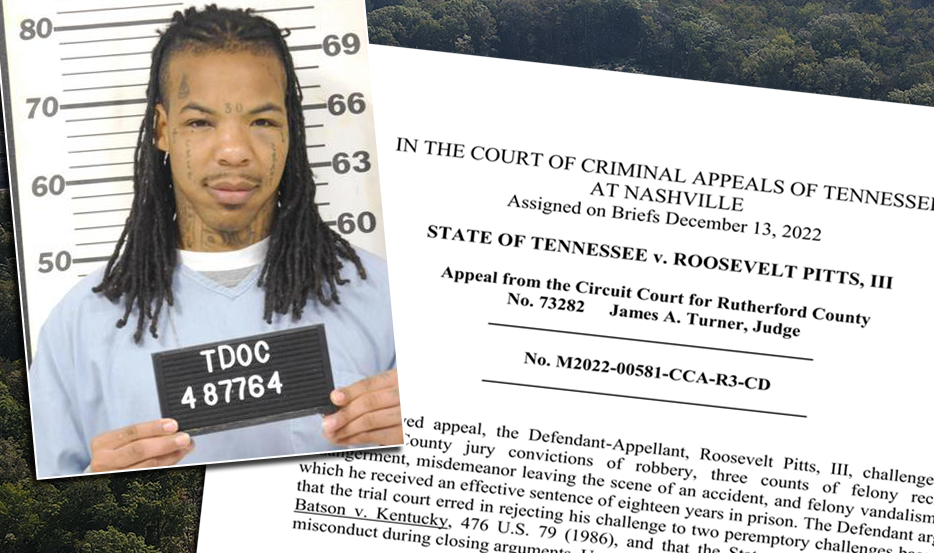 (Rutherford County, TN) A man convicted on charges of robbery, felony reckless endangerment, misdemeanor leaving the scene of an accident, and felony vandalism by a Rutherford County Jury has filed an appeal. Roosevelt Pitts, III, who was sentenced to spend 18-years in prison, argued that among other things, the State engaged in prosecutorial misconduct during closing arguments.

Looking back to the crime that landed Pitts before a jury, court documents show “On the morning of December 12, 2014, Carlos Velasquez [The Victim] and his ten-year-old daughter were outside in the driveway of their Rutherford County home warming their truck and waiting for the school bus. Velasquez saw a person, later identified as Pitts, crouched down behind his truck, pass by him, then get inside his truck. Pitts pushed Velasquez and his daughter with the door of the truck, struck Velasquez multiple times, and yelled, “move, move, b----.” Pitts put Velasquez's truck in reverse and began to drive away. A struggle ensued, and Velasquez fell into a mailbox and onto the ground."

Pitts crashed the truck into a tree a short distance away from the site of the theft. Police quickly arrived and placed the defendant in handcuffs. When police asked Pitts why he stole the truck, his response was, “he needed a ride to Nashville, so he took the truck.” The victim later paid $4,000 to fix the damaged Ford F-150 that was crashed into a tree, according to court documents.

The Court of Criminal Appeals ruled in favor of the decision made in the Rutherford County Circuit Courts, which means the conviction and sentencing for Roosevelt Pitts, III stands and the case will not be reheard. The Clerk of the Appellate Courts filed the ruling on January 5, 2023.

Pitts, who is currently 31, was denied parole at a past parole hearing. The sentence for Pitts will officially come to a close in year 2029, just 6-days after his 38th birthday. He will remain behind bars at the Whiteville Correctional Facility in Hardeman County, Tennessee.