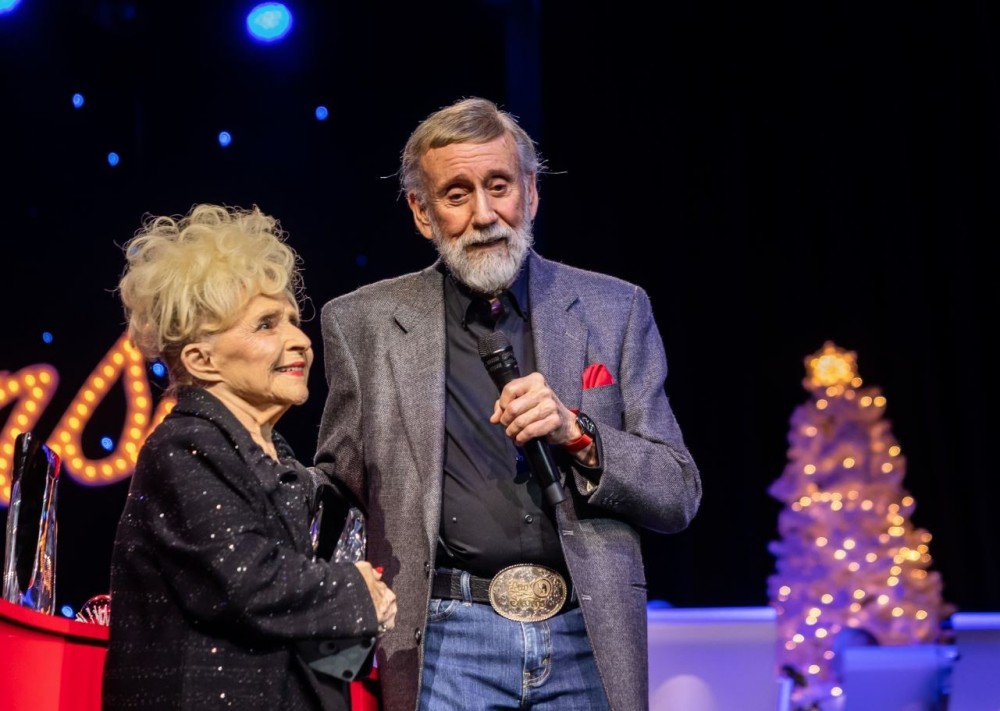 NASHVILLE, Tennessee - On a Sunday night that was years in the making, Brenda Lee and Ray Stevens were honored with the Cecil Scaife Visionary Award which raises money for the Cecil Scaife Endowment at the Mike Curb College of Entertainment and Music Business at Belmont University.

Both were taken aback as they each went on stage with an award to present.

Nashville gentry was there to help celebrate as performances were given by Mandy Barnett, Charlie McCoy, Ricky Skaggs, Lang Scott, Jeannie Seely, and the McCrary Sisters who sang the honorees’ hit songs.

Mike Curb gave a big shout-out via video to the “King and Queen” of Nashville, Brenda Lee, and Ray Stevens.

“They are in their 8th decade of performing and they look and sound so great. So much talent!” Curb emphasized.

He continued by thanking everyone for participating in this wonderful scholarship opportunity.

Cecil Scaife’s daughter, LaRawn Scaife Rhea, was a cohost of the event as she thanked the audience for their support of the endowment fund. She along with Senator Marsha Blackburn were on stage as Ray and Lee presented each other with an award.

Lee queried, “Why am I getting an award? This is your night. Is this one of those TV shows where you’re spoofed?”

Ray assured her it was her night as well.

Both Lee and Ray hail from rural Georgia and have been friends for years. They also cite Cecil Scaife as someone who greatly influenced their careers.

Lee told Scaife-Rhea, “I loved your daddy dearly. And this is such a pleasure to be here and accept this with you.”

Lee also praised Ray for “giving himself to this industry.”

The most heartfelt tribute of the evening came from Pam Tillis where she spoke of growing up alongside Ray’s daughter, Susie Ragsdale. She also praised Ray for his vision of the music industry in Nashville.

Tillis then recalled that Lee’s mother, Grace Tarpley, used to babysit her and her siblings and remembers a home video of Brenda Lee doing the twist at her sweet sixteen party along with a movie from Lee’s wedding.  Pam Tillis’ dad, Mel Tillis, also wrote Brenda’s number one hit, “Emotion.”

She concluded by stating that Lee and Ray are the “bricks and mortar of this town” and have given their talents and themselves so selflessly as they brought “true joy to the world.”

The Cecil Scaife Visionary Award is given annually to an individual whose life and work have made it possible for future generations to realize careers in the music industry. That is why this scholarship/endowment is critical to the lifeblood of Music City.

The evening ended as the artists and audience participated in a rousing rendition of Lee’s renowned “Rockin’ Around the Christmas Tree.” It was a true delight to celebrate Brenda Lee and Ray Stevens as money was raised for Belmont’s Curb College of Entertainment and Music Business via the Cecil Scaife Endowment Scholarship.
– – –

Dec 19, 2022 at 04:31 am by Lisadonalds09052
A MUST READ FOR ANY ONE WHO HAS EVER FALLEN FOR CRYPTO SCAM BEFORE!!! My $1.65 million dolllars was stolen by a phoney wallet that refused to let me withdraw it. Their moniker was Coinbox/vip. When I launch the browser on my phone, the platforms page opens with the Coinbase logo. The legal description of their dapp wallet mentions Coinbase, and the help centre button links to Coinbase help. However, when I contacted Coinbase, they responded via email that they are not affiliated with Coinbox. Coinbox has now informed me that I must pay a 185k tax before receiving my funds. I immediately opened a case with Owlet tech recovery . com, a guaranteed recovery company, they patched me through MR MORRIS GRAY their smart contract developers on Whatsapp with [+1 (607) 698 0239 ] who then immediately performed a smart contract audit using digital triangulation from outsourced wallets. I'm crying right now as I just received a deposit of 127.4 Btc in my trust wallet. I'm now waiting for the Ethereum gas fee to come through so I can detach the remaining from outsourced wallets. his Email is: Morrisgray 830 @ gmail . com.....
Report
Dec 19, 2022 at 07:43 pm by Drgibo9spirit
DIVORCE AND PREVENT DIVORCE,call and whatsApp him on this +2349030368659 Divorce Spells should be used in extreme cases for example if your husband has disturbed you a lot and you are tired of his tortures, you need a divorce but he is not giving you and thus your life had become miserable in such cased you may go for these powerful Spells can also be used to prevent a divorce, if there are people who are not happy with your happy family life and are trying different ways to separate you and so are insisting on a divorce then these divorce spells should be used to protect you from all such evil people so that you may have a very happy and secured married life. Is your love life falling apart Do you want your love to grow stronger.contact or EMAIL drgibo9spirit@gmail.com,call and whatsApp him on this +2349030368659 or drgibo9spirit@gmail.com
Report